HOUSTON–West Texas Intermediate crude oil prices rose roughly 20 percent between mid-June and mid-September, creating the opportunity for North American operators to lock in hedges on future production. According to analysis of oil and gas hedging activity from Wood Mackenzie, that is exactly what they did, sending upstream hedging activity “surging” during the third quarter of 2017.

The analysis, which looked at 33 of the largest U.S. and Canadian upstream companies with active hedging programs, found that producers added 897,000 barrels a day of annualized new oil hedges during the third quarter, with most of the new derivative positions added at strike prices between $50-$60 a barrel.

The volume of new hedge additions represented a 147-percent increase compared with the second quarter of 2017, and was the highest volume of oil hedges added in a single quarter since Wood Mackenzie began tracking hedge additions in late 2015, says Andy McConn, research analyst at the company.

“Producers have demonstrated more willingness to hedge while prices rise,” McConn comments, noting that while increasing futures prices largely explain oil and gas companies’ eagerness to lock in prices, that is not the complete story.

“Many producers have been basing long-term growth targets on $50-a-barrel price scenarios. When futures prices rose above that level, producers may have viewed it as an opportunity to lock in prices that will enable them to hit–or maybe outperform–targets,” he relates. “Recent pressure from investors for producers to live within cash flow is likely compelling producers to limit exposure to price risk.”

According to the analysis, Hess and Cenovus Energy added the most oil hedges, accounting for 35 percent of the total new volume added. But many other producers also hedged significant oil volumes, with 14 companies each adding at least 25,000 bbl/d.

“Hedge positions significantly influence tight-oil producers’ decisions about budgets and activity. They are particularly pertinent at this stage of the year, when most companies are wrapping up the planning process for 2018,” McConn says. “Producers that are able to lock in prices above previous expectations may feel more comfortable with increasing activity levels. Others may leave budgets unchanged, and promote higher cash flow guidance to an investment community anxious about profits.”

The analysis also looked at natural gas hedging, which was more subdued than oil. Gas hedges were down 29 percent compared with the second quarter, with only 1.6 billion cubic feet a day of new annualized hedges added during the third quarter. Most were added at Henry Hub strike prices between $3.00 and $3.40 an Mcf, with Range Resources accounting for 27 percent of the total new volume added.

“Natural gas hedging activity has been much less volatile than oil during 2017, partially because of lower volatility in the underlying price of the commodity. Producers have demonstrated that inflections in gas price can trigger inflections in hedging behavior, similar to oil,” McConn states. 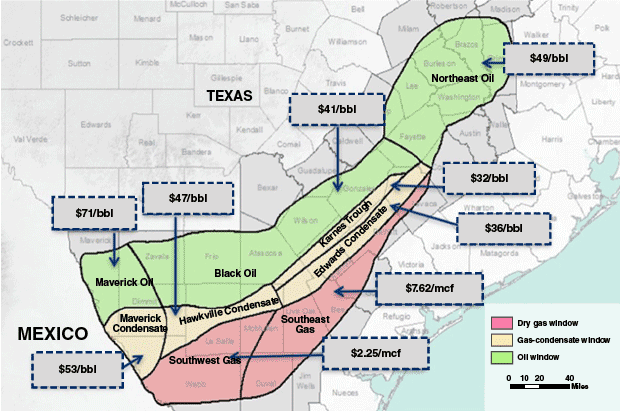 Wood Mackenzie’s analysis suggests that U.S. tight oil supplies will capture as much as 90 percent of future worldwide demand growth, with the company forecasting tight oil production doubling from 4.9 million bbl/d in 2017 to 9.6 MMbbl/d by 2024. As the second-largest tight oil producing region–behind only the Permian Basin–the Eagle Ford obviously will be counted on to deliver its share of production growth going forward.

In a separate report, Wood Mackenzie says the Eagle Ford’s economics make it well positioned for continuing development. “Although the Eagle Ford does not have the shine and excitement of Permian plays, it has the second-largest inventory of wells breaking even (at an oil price) below $50/bbl,” the report reads. “This metric puts it just behind the Delaware and Midland Wolfcamp combined.”

Breakeven costs continue to trend down across the Eagle Ford, with half-cycle figures coming in near $30/bbl for the Karnes Trough condensate and $2.25/Mcf for the Southwest gas subplay (Figure 1), according to Wood Mackenzie.

Pointing out that Pioneer Natural Resources, Cabot Oil & Gas and Sanchez Energy are among the many operators that have added fracture crews to complete backlogged drilled but uncompleted wells, Wood Mackenzie says DUCs can be a low-risk, high-return strategy in a stronger price environment.

Even with increased completion activity targeting DUCs, the report projects that the Eagle Ford rig count will grow by 8 percent in 2018, primarily from activity in the black oil, Edwards condensate and Karnes Trough subplays. “The Eagle Ford has an astounding amount of undrilled acreage given its maturity. Even its core acreage is less than one-third drilled up under current spacing assumptions,” Wood Mackenzie states. “Operators are far from exploring all it has to offer, and new learnings from rig technology and the geology of the land itself are adding insights into its potential return on investment.”

However, Wood Mackenzie notes that downspacing Eagle Ford horizontal wells has so far not increased inventories as hoped. In fact, the study says downspacing has impacted productivity adversely.

“Although it has been a popular strategy to use technological advancements and tighter spacing to maximize leaseholds in the mature play, the risks are leading some (operators) to revert to wider spacing,” the report reads. “Fracture overlap, well interference and depleted pressure from stacked or staggered wells has inhibited production economics.”