The shift in U.S. petrochemical capacities enabled by increased production from shale gas plays will continue, and the value of the liquid constituents contained in the natural gas stream is an important economic driver for future production growth in the Marcellus and Utica plays, according to a report from IHS Markit.

The rich gas produced from the Marcellus and Utica, which IHS Markit predicts will account for more than 40 percent of total domestic natural gas output by 2030, is creating unprecedented petrochemical opportunities in Pennsylvania. An example is the new Shell Pennsylvania Chemicals ethane cracker in Beaver County, 30 miles northwest of Pittsburgh, the first of its kind in the Northeast region and the largest private investment project in the history of the commonwealth.

Shell says the cracker is expected to consume 105,000 barrels of ethane a day. The company has announced long-term contracts with a group of anchor suppliers active in both the Marcellus and Utica, including Antero Resources, CONSOL Energy, PennEnergy Resources, Noble Energy, Hilcorp, Eclipse Resources, and Ascent Resources. Main site construction on Shell’s plant is scheduled to begin late this year or in early 2018.

Given the proven productivity of the Marcellus and Utica plays, Team Pennsylvania Foundation commissioned IHS Markit to evaluate opportunities for petrochemical processing and plastics manufacturing in the commonwealth. With strong growth expected in both natural gas and NGL production in Pennsylvania, the findings highlight significant potential for economic development and job creation from petrochemicals and plastics manufacturing across the state thanks to competitive advantages such as low-cost natural gas and NGL supplies, proximity to end-use markets, expanding infrastructure, a skilled workforce, and an established regional plastics manufacturing industry, the report says. 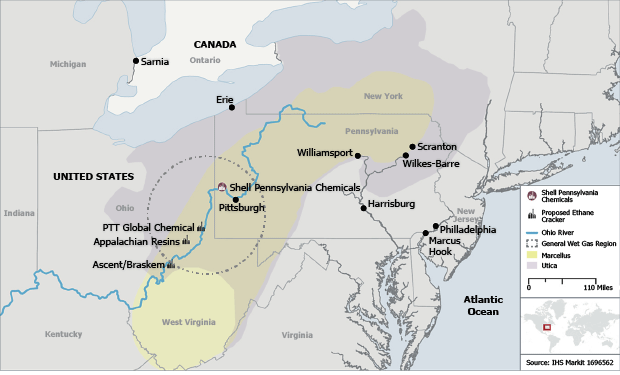 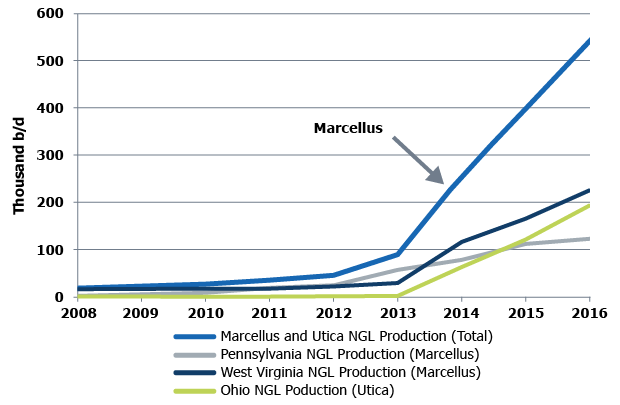 The development of the Marcellus and Utica Shale plays has resulted in significant economic benefits for Pennsylvania over the past decade, even during periods of lower natural gas prices, IHS Markit notes. With Marcellus and Utica production forecast to reach 40 billion cubic feet a day by 2030, the report says, a key factor that continues to drive natural gas development is the fact that 30-40 percent of Marcellus and Utica gas produced in Pennsylvania is rich in liquids (Figure 1)–predominantly ethane and propane–both of which are in high demand as petrochemical feedstocks to produce polyethylene (PE) and polypropylene (PP).

Between 2026 and 2030, IHS Markit projects that NGL production to meet U.S. demand will reach nearly 6.3 million barrels a day, of which more than 1 million bbl/d of NGL will be produced in the Marcellus and Utica (Figure 2). “Expected Marcellus and Utica ethane production will be enough to support up to four additional world-scale ethane steam crackers in the region, even after meeting the demand from the Shell Pennsylvania Chemicals ethane steam cracker. This also is in addition to meeting the demand for ethane from pipelines currently shipping it out of the region and future pipeline projects that will do the same,” the report reads.

At year’s-end 2016, all of the ethane recovered from gas produced in Pennsylvania was being shipped out of state, the report claims. While IHS Markit predicts that ethane primarily will be used as a petrochemical feedstock with opportunities for additional steam crackers in the footprints of the Marcellus and Utica plays, the heating fuel market will continue to account for a significant share of demand for propane produced in the commonwealth.

Pennsylvania has a sufficient supply of NGL to support a “world-class” petrochemical industry, the report concludes, noting that the state’s major competitive advantage is access to an expanding supply of low-cost natural gas and NGLs capable of supporting four additional integrated ethane crackers similar in size to the Shell Pennsylvania Chemicals facility.

In addition, IHS Markit says Pennsylvania has a significant locational advantage. More than two-thirds of U.S. and Canadian PE and PP demand is located within 700 miles of southwestern Pennsylvania, and the commonwealth already has a large installed base of plastics manufacturing available to purchase PE/PP output.

“New regional petrochemical producers will be well positioned to compete for a respectable share of North American demand because of the shorter supply chain. Petrochemical producers operating in the region also will be in a strong position to take advantage of export opportunities,” the report says, adding that southwestern Pennsylvania’s PE and PP production is forecast to be highly competitive on a cash cost basis relative to existing production centers, including the Middle East.

Moreover, with regional PE and PP supply growth, Pennsylvania plastics companies may see significant cost savings and advantages over competitors located outside of Northeast, according to the findings. IHS Markit says it identified a cluster of in-state manufacturers that use PE/PP to produce products such as plastic films, containers, housewares, food-grade packaging, and bottles for industrial and consumer markets. The development of PE and PP production will benefit Pennsylvania’s plastic manufacturers that use the resins as “foundational building blocks” for plastics products, it holds.

“These actions are critical to ensuring that Pennsylvania is positioned to develop long-term, job-creating manufacturing opportunities,” the report cautions.

IHS Markit estimates that Marcellus and Utica wet gas production contains 8-12 percent ethane in Pennsylvania, and that the Marcellus could potentially yield as much as 560,000 bbl/d, with the Utica producing as much as 235,000 bbl/d by 2026. For reference, it says an estimated 90,000 bbl/d of ethane is required as feedstock to produce 1.5 million metric tons of ethylene annually.

Increasing Pennsylvania’s Marcellus and Utica natural gas production and expanding the state’s processing/fractionation, transportation and storage capacities will require major capital investments. As new petrochemical plants come online, the report says demand for natural gas will increase and more ethane will be recovered rather than being rejected and left in the natural gas stream.

Based on IHS Markit’s views of upstream activity and NGL production, new midstream NGL infrastructure, incremental gas processing, NGL pipelines, NGL fractionation (specifically de-ethanizer capacity), and both ethane and propane storage will be required by 2020 to meet forecasted demand from the startup and commissioning of the new Shell plant, let alone possible additional crackers yet to be built in Pennsylvania.

IHS Markit forecasts $7.3 billion-$10.0 billion will be invested in NGL assets (e.g., gas processing facilities, NGL fractionators, NGL pipelines, and NGL storage facilities) in three states (Pennsylvania, Ohio, and West Virginia) between 2017 and 2025, with $2.7-$3.7 billion of that being invested in Pennsylvania. “These investments do not include the $6 billion that Shell Pennsylvania Chemicals will invest in its ethane cracker,” the report states. “Pennsylvania needs to move quickly by articulating a clear vision for its own destiny, and implement an economic strategy to cultivate a manufacturing renaissance.” 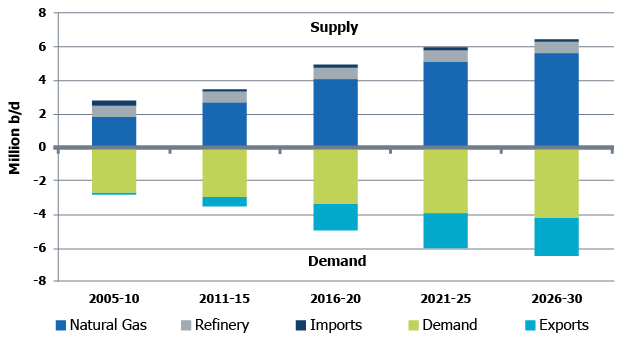 Crude oil prices are a key factor in NGL prices. The good news is that following the price trough that emerged in late 2014, IHS Markit forecasts a gradual, sustained price recovery that will begin this year and continue for several years, increasing West Texas Intermediate prices to $75 a barrel on average for the period 2017-25. By 2030, the company says it expects WTI crude prices to be $117/bbl. IHS Markit projects that the annual average Henry Hub natural gas price will rise slowly over the next several years, reaching $4.70 per MMBtu by the 2026-2030 timeframe. The Northeast Hub annual average price will reflect increasing supplies from Marcellus and Utica, and stay about $0.60/MMBtu below the Henry Hub price.

All Mont Belvieu NGL prices will rise over the next 15 years as expansions of export terminal capacities and new petrochemical crackers help shrink ethane and propane surpluses (Figure 3), the report predicts. Annual average ethane prices are expected to rise from $0.21/gallon in 2016 to $0.85/gallon by 2030 while annual average propane prices rise from $0.48/gallon to $1.56/gallon by 2020, according to the analysis.

There have been a significant number of ethylene expansions and new capacity announcements in North America over the past few years. To date, companies are planning to build more than 13 million metric tons of additional ethylene capacity by 2022, and more than 2.6 million metric tons of propylene capacity in North America. Even with the large amount of already announced capacity additions, IHS Markit says additional project announcements are expected in coming years.

For PE, IHS Markit anticipates that new capacity additions will outstrip U.S. demand growth over the 2030 forecast horizon, leading to major increases in PE exports (growing from 34 to 41 percent of total U.S. production by 2020). “Because of the low-cost position of domestic PE producers, exports to higher-cost regions will be very competitive, leading some producers to build new U.S. plants primarily to serve overseas export markets,” the report says.

The story is very different for PP. North American PP supply is constrained, resulting in rising imports. Many U.S. producers are scrambling to alleviate the existing PP bottleneck by restarting idled units. The only new PP capacity additions forecast by IHS Markit are two new plants on the Gulf Coast, both of which are expected to come online in 2019 at the earliest. While noting that new PP capacity in the Midwest or Northeast would have strong logistical advantages in serving large regional demand centers, IHS Markit says project economics are riskier compared with ethane and propane steam crackers.

The economic development opportunities for natural gas and NGLs in Pennsylvania have arisen quickly over the past 10 years as drilling and production activity accelerated first in the Marcellus and then the Utica. IHS Markit estimates that $6 billion was invested in NGL-related assets between 2010 and 2016 in Pennsylvania. These investments, along with continued rapid growth in NGL production through 2030, provide Pennsylvania with a golden opportunity to promote new economic development in several ways.

“While Pennsylvania consumers are currently using a portion of available Marcellus Shale natural gas, 100 percent of ethane produced and recovered as a petrochemical feedstock is being shipped out of the commonwealth to other end-use markets,” the report reads. “If Pennsylvania does not respond, then other states will.”

There is high demand from outside Pennsylvania for attractively-priced NGLs (especially ethane) and the plastics derived from them, IHS Markit says. If the commonwealth does not begin to take immediate steps to maximize its production and use of these chemicals, these attractively-priced NGL will be exported and the economic development opportunity will diminish.

“The NGL market will continue to evolve rapidly, increasing the urgency for Pennsylvania to implement immediately a set of coordinated strategies to maximize the economic development opportunities of producing large amounts of natural gas, NGLs, and the petrochemicals and plastics derived from these resources,” the report concludes.