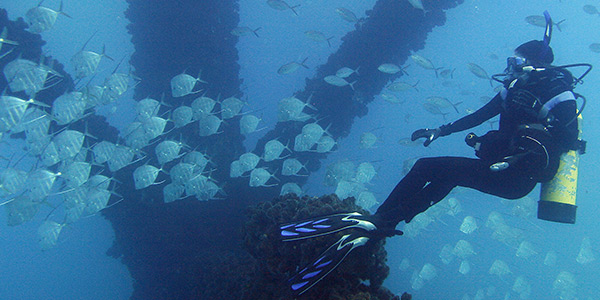 By James Kinsey and Jeff Wood

GODLEY, TX.–Well decommissioning is the last step in the final stage of a well’s lifecycle. The number of wells decommissioned has been increasing in recent years in producing regions around the globe, notably among them the U.K. sector of the North Sea with its high-cost, mature fields. A study issued last year by Wood Mackenzie Ltd. estimated that 142 fields with more than 3,000 wells on the U.K. Continental Shelf would cease production between 2016 and 2021.

The plug-and-abandonment phase accounts for roughly 40 percent of the cost of decommissioning a well. This phase plays an important role, since it must reliably seal the well against any leak into the surrounding environment while also removing any unnecessary surface equipment. In some geographical locations, removing or sectioning the tubular is required by governing authorities so that the well may be prepared for a cement plug to be set. However, removing the tubular is not always simple, straightforward, or cost effective.

According to a major North Sea service company, it takes an average of 15 days to P&A a well using the section milling technique. At an estimated rig cost of $600,000 (U.S.) a day, this would equate to $9 million of rig time to complete an abandonment if everything went as planned. This significant cost led operating companies to seek alternative technologies that could prove effective and be more cost efficient.

One potential solution was “limited-penetration” perforating, which would enable setting an annular cement plug in considerably less time compared with conventional section milling techniques. For this alternative method to be successful, however, a new breed of perforator was required. 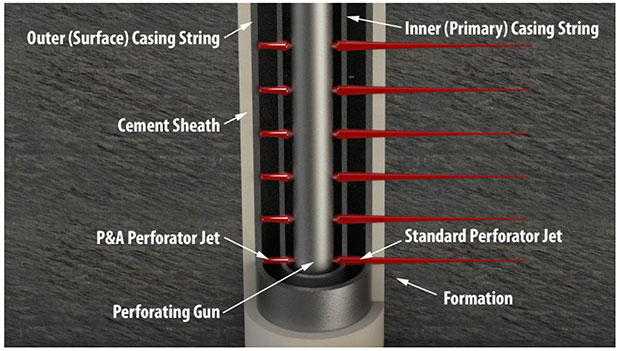 As illustrated, the standard perforator exits the confinement of the casing and travels outward into the formation, while the P&A perforator stops short of the outer casing string, limiting the communication to the annulus so a cement plug can be set to zonally isolate this annular area to meet the decommissioning requirements.

Initial requests for the new P&A perforator technology were isolated to scenarios where the desired application was perforating an inner (primary) casing string and stopping the perforation short of an outer (surface) casing string. If the perforator could complete this application, a path would be created to allow a cement plug to be set in the annulus between the primary and surface casing strings. It also was critical for the system to be able to provide perforated holes around the entire circumference of the casing. This would reduce the potential of cement channeling issues and allow for a more homogeneous cement plug to be set.

Before development could begin, however, a myriad of properties regarding the downhole environment had to be considered. Running restrictions, specific casing properties, and area open to flow that the perforator was required to produce were all important issues to address as the limited-penetration technology was developed. The majority of perforating systems are developed and certified in ideal lab conditions. However, for P&A perforators, considering the downhole conditions could be the difference between a successful P&A or unnecessary hours and expense spent retooling to attempt a different technology. To ensure that these potentially adverse conditions were accounted for, the limited-penetration P&A perforator was developed and tested to verify that it would meet the desired application in a number of scenarios, including:

After results of testing in simulated downhole conditions indicated that the system was ready for field trials, a North Sea service company deployed the newly designed system and shared the P&A efficiency specifics after the operation was completed. This information indicated that the P&A operation took only two days, representing a rig cost of $1.2 million. When compared with section milling (15 days and $9 million), the new technology saved the operating company $7.8 million in estimated rig time. Driven by the compelling economic benefits, the technology now is replacing section milling for P&A operations in regions around the world.

As the technology has gained industry acceptance, the challenges presented have continued to increase in complexity. Operator requests include scenarios where the desired application is to perforate through multiple casing strings and to stop the perforation short of an outer (surface) casing. Some of the scenarios were previously thought impossible using conventional perforating technologies.

The design and development process for multistring applications began very similarly to the single-string application. However, because of the multitude of tubular orientation scenarios that could be present downhole, the testing was more strenuous and multifaceted. Unless the perforating event was taking place near a hanger, the relationship between the tubulars was nearly impossible to determine. Because of this, testing had to be conducted in a format similar to what is shown in Figure 2 to assume a “worst-case” scenario.

If the perforator could perform the desired application in both of these scenarios, it would work in all potential downhole scenarios. This testing represented the minimum and maximum clearances that the system would face. The single perforator and full system testing indicated the designed charge would indeed work in all of these scenarios. The field trials showed similar efficiency gains to the single-string application. The breadth of limited-penetration P&A perforating options has now grown to encompass almost every scenario that has been requested by operators.

These new capabilities prove that perforating can play a much more significant role in plugging and abandoning wells. To date, this technology has been successfully deployed into more than 70 wells around the globe. With aging fields in many regions and increased regulations, P&A requirements do not show any signs of slowing over the next several years. The introduction of groundbreaking P&A perforating options has unlocked new possibilities for operators to complete well decommissioning and abandonment in ways not previously thought possible. The improvements witnessed by the operating companies in both cost reduction and time efficiency indicate that this technology will have staying power in decommissioning operations for years to come.

James Kinsey is a project manager and lead shaped-charge designer in the energetics technology group at Owen Oil Tools, a division of Core Laboratories’ production enhancement group. He has been with the company for seven years, and his experience has been primarily with shaped-charge design, including limited-penetration, deep-penetrating, and big-hole shaped charges. He was the lead designer responsible for the development of the company’s PAC™ limited-penetration P&A and PerFRAC™ perforating charge product lines.

Jeff Wood is a project manager and design engineer for perforating gun hardware in the innovative technology group at Owen Oil Tools, a division of Core Laboratories’ production enhancement group. He has served at the company for 10 years and has experience with most of Owens’ product lines, including perforating gun hardware, setting tools, bridge plugs, shaped charges, and pipe recovery. Wood was the lead design engineer responsible for the development of the ACE™ and ACE extended tubing cutter product lines. He holds a B.S. in mechanical engineering from the University of Texas at Arlington.