WASHINGTON–Most Americans think the United States should increase the country’s natural gas production for export to Europe, indicates a May report from the Pew Research Center.

“As much of Europe grapples with how to reduce its dependence on Russian oil and gas, 61% of Americans say they would favor the United States expanding production to export large amounts of natural gas to European countries,” the report says. “A smaller share (37%) say they would oppose expanding natural gas production to export to countries in Europe.”

According to Pew, the data was gathered in a May 2-8 survey of 10,282 U.S. adults, and shows that Americans’ broader priorities for domestic energy production remain largely stable from earlier in the year, despite uncertainty in global energy markets driven by the war in Ukraine and rising U.S. oil and gas prices.

Seven-in-ten Republicans and Republican-leaning independents say they favor exporting large volumes of liquefied natural gas to European countries, as do a somewhat smaller majority of Democrats and Democratic leaners (55%), Pew reports. These findings are presented in Figure 1. 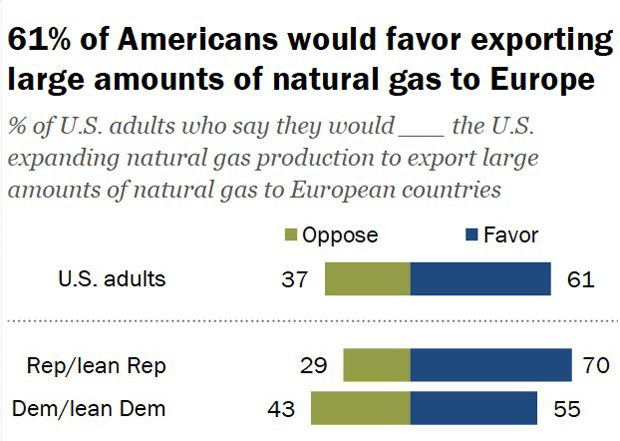 Note: Respondents who did not give an
answer are not shown.

The organization notes that LNG exports have become more pertinent in 2022, as Russia’s invasion of Ukraine has prompted European countries, including Germany and Italy, to announce plans to phase out Russian oil and gas imports even though that country has been Europe’s largest energy supplier. Meanwhile, the Biden administration has pledged to increase natural gas exports to the European Union despite challenges such as production timelines and gas infrastructure capacity limits.

“While the survey finds broad support for exporting natural gas to Europe, the findings also underscore how potential impacts on domestic prices are front-of-mind for large shares of Americans,” Pew states.

It goes on to say 67% of U.S. adults continue to support developing alternative energy sources, such as wind and solar, to meet U.S. energy supply; while 32% express a preference for focusing on expanding U.S. oil, coal and natural gas output. Those views vary little from a January survey, Pew mentions.

“However, partisan differences over the country’s energy priorities are now as wide as they have been in recent years, largely reflecting a shift among Republicans toward greater emphasis on fossil fuels during the Biden administration,” Pew assesses. “Within the last year, the shares of Republicans who support more offshore oil and gas drilling as well as more hydraulic fracturing for oil and gas have both increased.”

The report indicates majorities of both Republicans and Democrats say the impact on U.S. natural gas prices should weigh heavily into considerations of whether to increase gas exports to Europe, with 75% of Republicans agreeing, compared with 60% of Democrats. By comparison, it continues, 73% of Democrats say climate impacts merit significant consideration when it comes to whether the U.S. should export large amounts of natural gas to European countries, while only 24% of Republicans concur (Figure 2). 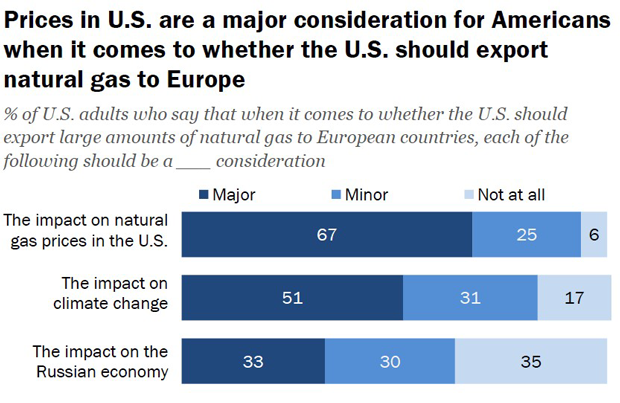 Notes: Respondents who did not give an answer are not shown.

“Differences in views are especially wide between those at the ends of the political spectrum,” Pew details, adding that “81% of liberal Democrats say climate change should be a major factor in such a decision, compared with just 16% of conservative Republicans.”

Meanwhile, it adds, 37% of Democrats and 30% of Republicans deem impacts on the Russian economy as worthy of major consideration on the question of increasing U.S. gas exports, Pew remarks.

“Among Republicans and Republican leaners, more say the United States should prioritize the production of oil, coal and natural gas rather than alternative sources such as wind and solar (59% versus 41%),” Pew contrasts. “This balance of opinion is about the same as it was in January. However, support for prioritizing the development of alternative energy sources remains much lower among Republicans than in May 2020, during the last year of the Trump administration. At that time, about two-thirds (65%) of Republicans said developing alternative sources like wind and solar should be the more important priority for the United States.”

Although Americans continue to express broad support for expanding wind and solar energy production, and 54% say they favor more nuclear power plants, the report finds growing support for certain aspects of domestic oil and gas production. “Smaller shares of Americans favor more offshore oil and gas drilling (48%) or more hydraulic fracturing for oil and gas (45%),” it details. “However, the shares of Americans who support more offshore drilling and fracing are both up slightly from April of 2021 (by 5 and 4 percentage points, respectively).”

Pew also says it detects a growing gulf in the ideological divide regarding the desirability of more hydrocarbon activity. “Partisan differences over expanding oil and gas drilling and hydraulic fracturing have edged wider in recent years,” it relates. “In the new survey, 76% of Republicans favor more offshore oil and gas drilling, compared with 27% of Democrats.

Pew also indicates that, although most Americans recognize the United States relies primarily on fossil fuels, relatively few Americans know that the U.S. produces most of the energy it consumes.

About three-quarters of Americans (74%) say correctly that the U.S. relies mostly on fossil fuel sources such as oil, coal and natural gas to meet its energy needs. Much smaller shares think the United States relies mostly on renewable energy sources (5%) or nuclear power (3%), Pew adds.

While Americans with higher levels of formal education are more likely to say the country produces most of the energy it consumes, the fact remains not widely known even among that cohort, the report finds. “About a third (35%) of adults with a postgraduate degree correctly say the U.S. produces most of the energy it uses within the country, compared with 26% of those with a high school or less education,” Pew details.

“When it comes to U.S. reliance on fossil fuel sources, majorities across all levels of education are aware that the country relies mostly on fossil fuels,” Pew concludes. “Those with a college degree or more education are somewhat more likely than those with some college experience or less education to know this.”