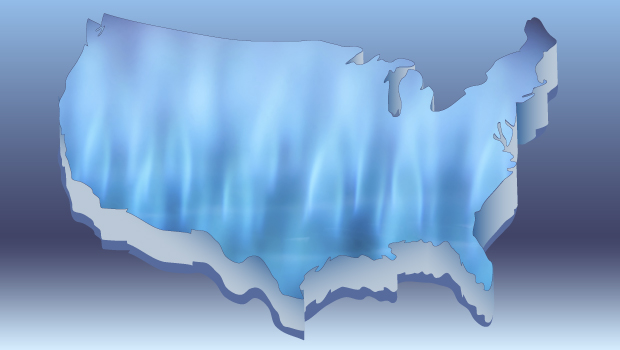 CHARLOTTESVILLE, VA.–Approximately 4,600 megawatts of U.S. coal-fired generation capacity were retired in the first four months of 2015, and another 7,700 mw are scheduled to close in the final eight months as utilities work to comply with the U.S. Environmental Protection Agency’s new mercury and air toxics standards (MATS), which took effect in April. 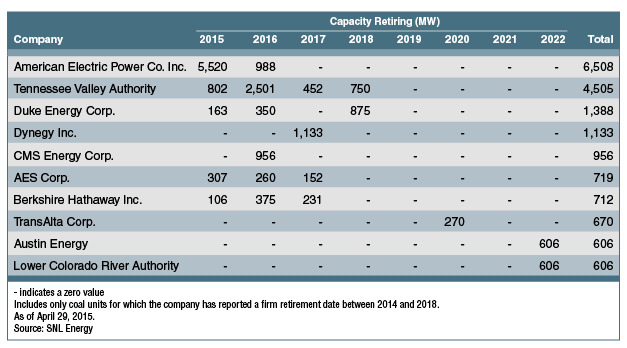 This year’s U.S. power plant closures represent 4 percent of the nation’s installed coal capacity and make up one-third of all coal plant retirements between 2010 and 2015. The pace of retirements will ease in 2016, when units with one-year extensions for MATS compliance close. Still, however, nearly 7,300 mw of coal-based power will shut down next year. Retirements taper off after that, with less than 7,000 mw slated between 2017 and 2022.

Assuming scheduled retirements proceed as planned, approximately 46,000 mw of U.S. coal capacity will be closed between 2012 and 2022. That number almost undoubtedly will grow as generators continue to decide the fate of their fleets.

The average age of the units being closed is 56 years, meaning that many are less efficient and have fewer environmental controls than the surviving coal fleet. Figure 1 shows the 10 companies retiring the most coal capacity between 2015 and 2022. As a group, they own more than two-thirds of the nearly 26,400 mw of U.S. coal capacity being closed in 2015-22. Of the 26,400 mw being retired, a little more than 11,000 mw (42 percent) will be converted to burn natural gas, with a much smaller 335 mw converting to oil and 58 mw to biomass.

The Dash To Gas 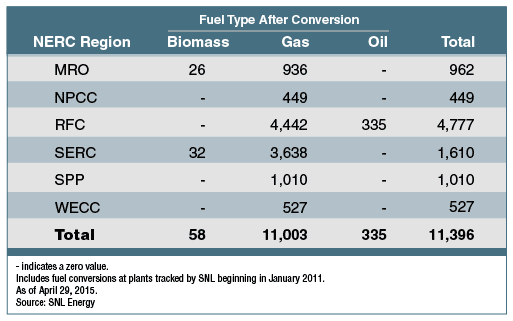 Many of the conversions from coal to natural gas will be in the ReliabilityFirst Corp. (RFC) region of the North American Electric Reliability Corporation (NERC), which includes parts of the Mid-Atlantic and Midwest (Figure 2).

NRG Energy Inc. will perform many of the RFC gas conversions over the next two years. Gas already makes up about half of NRG’s installed generating capacity, and it plans to switch more than 5,600 mw of mostly coal-based power to gas across its U.S. service territory from spring 2015 through fall 2017. The coal-to-gas conversions include Avon Lake units 7 and 9 in Ohio, Dunkirk units 2-4 in New York, Shawville units 1-4 in Pennsylvania, Joliet units 6-8 in Illinois, and Big Cajun unit 2 in Louisiana.

The SERC Reliability Corp., which covers the southeastern United States, is the second-largest NERC region for coal plant conversions, with gas again being the biggest beneficiary.

Southern Company subsidiary Alabama Power Co. closed units 6 and 7 at its Gorgas plant and stopped using coal at units 1 and 2 of its Barry plant in April, when the MATS rule took effect. Southern also retired nearly 2,000 mw of coal capacity in April across the Branch and McManus plants in Georgia and the Yates plant in Alabama. Gas will succeed coal at many of Southern’s units. Unit 7 at Yates was scheduled to be repowered on natural gas on May 4, followed by unit 6 in mid-2015.

By April 2016, Alabama Power will cease burning coal at units 1 and 2 of its Greene County plant, and start operating them solely on gas. 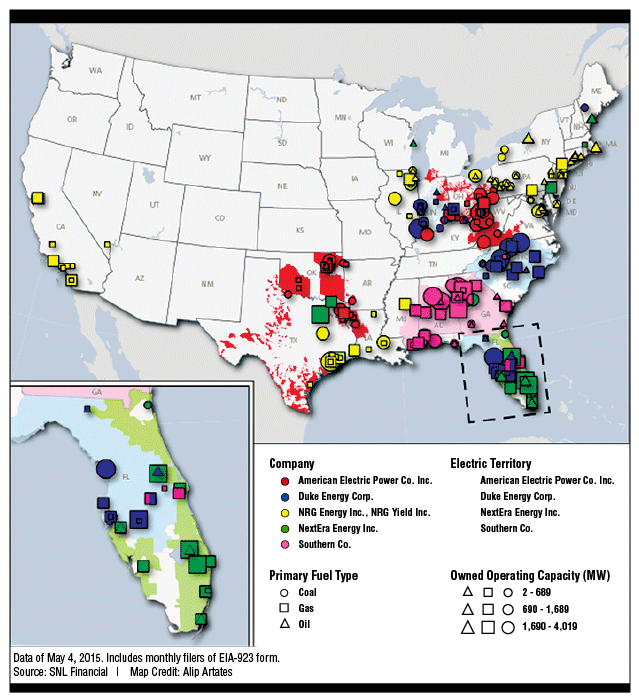 Despite the already large drop in coal demand, Southern has made additional plans to reduce its dependence on the fuel. On April 23, subsidiary Mississippi Power Co. decided to retire units 1 and 2 at its Watson plant in Mississippi by July 1. And in February, Southern’s Gulf Power Co. unit disclosed plans to retire coal capacity at units 1 and 2 of the Smith plant in Florida by the end of March 2016.

More coal closures could be announced after EPA issues its final rule for lowering carbon emissions from the power sector. The agency’s Clean Power Plan for existing plants sets state-specific greenhouse gas intensity reduction targets of 30 percent below 2005 emission levels by 2030. The final rule is expected this summer, with state implementation plans due next summer.

The rule established a 2012 base line for carbon cuts, frustrating utilities that made significant investments in lowering emissions before then. Many coal-fired generators also have balked at the Clean Power Plan’s proposed 6 percent reduction in the carbon dioxide output rate of coal-fired units, deeming the cut too steep even for newer and more efficient facilities. 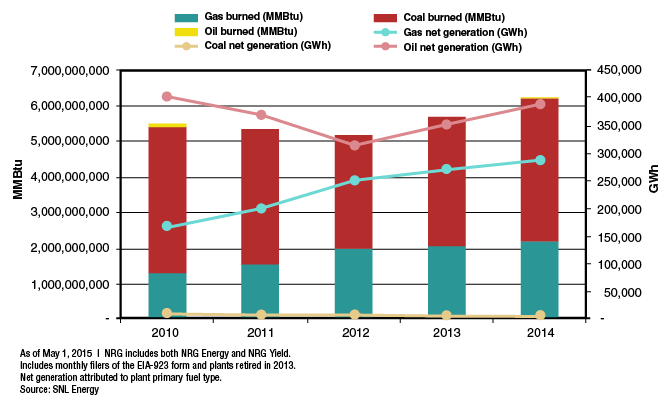 Duke’s coal burn diminished less than 1 percent between 2013 and 2014, but future declines are on the horizon. The company retired 748 mw of coal-fired capacity in 2014 and plans to retire at least 1.4 gw by the end of 2018. In April, Duke also completed converting the 170 mw unit 3 at W.S. Lee from coal to natural gas.

On the other side of the aisle, gas burn by Duke-owned units increased 4 percent between 2013 and 2014, and likely will continue to rise. In addition to the coal-to-gas conversion, Duke has nearly 2.8 gw of new gas-fired generating capacity in active development.

With the increasing share of gas-fired plants in its generation portfolio, Duke has been active in the gas midstream sector to secure gas supplies. The company owns a 40 percent stake in the proposed Atlantic Coast Pipeline, which will run from West Virginia, through Virginia, and into North Carolina. On May 5, Duke announced that it had purchased a 7.5 percent share in the Sabal Trail Pipeline project, which will run from Alabama, through Georgia, and into Florida.

While Southern’s coal burn has been on the rise since 2012, it may not continue along that trajectory. The company retired almost 2 gw of coal capacity in April, and plans to retire another 558 mw next year. In addition, Southern has 2.7 gw of coal-fired capacity slated to convert to gas.

Gas burn continues to grow at Southern, which estimated 1.9 billion cubic feet a day of consumption in first quarter 2015. In addition to coal-to-gas conversions, Southern has 2.4 gw of gas-fired capacity in active development.

American Electric Power owns 35.1 gw of fossil-fueled capacity, consisting of 25.3 gw of coal, 9.7 gw of gas and 21 mw of oil. The company was behind only Duke in the amount of fossil fuels it consumed in 2014, but its fuel burn ratios have remained relatively consistent over the past five years, with the share for gas increasing only 2 percentage points in 2014 to 11 percent, while coal’s share decreased 2 percentage points to 89 percent.

American Electric Power’s coal burn likely will decline in coming years since the company plans to retire a whopping 6.5 gw of coal-fired capacity by the end of 2016 and convert another 730 mw to natural gas. Gas burn likely will make up the difference. While the company does not yet have any gas projects in development, it reported a 68 percent year-to-year increase in gas-fired generation in the first quarter.

NextEra Energy is the fifth largest fossil fuel-fired capacity owner with 28.4 gw, the majority of which (21.8 gw) is gas-fired. Gas burn made up 92 percent of NextEra’s 789.4 quads of total fossil fuel consumption in 2014, an increase of 6 percent from 2010.

Like Duke, NextEra is stepping into the gas midstream business as well, including a 33 percent ownership stake in the Sabal Trail Pipeline project and a 35 percent interest in the Mountain Valley Pipeline.

CHARLOTTE COX is a senior analyst at SNL Energy. She writes data-focused analysis covering renewable development, power generation, and natural gas midstream and retail sales. Her work has been cited by numerous national, local and trade publications. Cox holds a B.S.M. in finance from Tulane University.

MOLLY CHRISTIAN is a senior coal reporter in SNL Energy’s Arlington, Va., office. She previously served as editor of “Argus Coal Daily,” a news and price intelligence publication covering the U.S. coal sector. Prior to that, Christian produced content for KPLU radio, a Seattle-based NRP affiliate. She holds a bachelor’s in magazine journalism from Ohio University.

NEIL POWELL is an industry analyst, and has written data-driven articles covering North American coal production, power generation, and natural gas midstream activities for SNL Financial. His work has been cited by government agencies, and numerous national and trade publications. Powell holds a B.B.A. in economics from James Madison University.