The number of global offshore project commitments is expected to not only pick up serious momentum, but reach a new record level through 2025, according to a report from Rystad Energy.

Defining a development project as committed when more than 25% of its overall greenfield capital expenditures are awarded through contracts, Rystad forecasts 592 global project commitments in the five-year period between 2021 and 2025. Looking at previous five-year intervals, that compares to 355 total offshore commitments in 2016-20, and 478 in 2011-15.

Growth is expected across all water depth levels, led by deepwater commitments. Although shallow-water commitments (water depths to 125 meters) will take the largest share of the total offshore project pie, rising to 356 from only 206 in the previous five years, the increase is a more modest 10% when compared with the 2011-15 count of 323 projects.

The most impressive growth will occur in deepwater commitments (125-1,500 meters). “Deepwater commitments will see the most growth as their cost has now become much more competitive against greenfield continental shelf reserves,” the report states, noting that the number of projects is expected to rise to 181–a significant jump from 115 in 2011-15 and 106 in 2016-20.

Commitments to projects in ultradeepwater areas beyond 1,500 meters will also tick up, Rystad says, forecasting growth from 43 in the previous five years to 55 projects through 2025.

Rystad’s latest Offshore Cost Benchmarking Report shows that the difference in the cost of greenfield shelf reserves compared to deep water fell dramatically from the highs seen in 2014, from more than $5 per barrel of oil equivalent to only around $1/boe in 2020.

Due to the expected growth in exploration, drilling and production activity over the next five years, the number of new offshore facilities is set to increase, meaning floaters and subsea tiebacks are also projected to rise. Globally, companies are likely to prefer leased FPSOs over owned units, based on both reported data and assumptions made by operators. Rystad Energy expects a 50% rise in the number of owned FPSOs expected to be used on upcoming projects through 2025.

Subsea tiebacks are significantly less capital-intensive compared to fixed and floater technologies, and they also facilitate quicker turnaround times from the start of field development to first oil. Furthermore, the large number of pre-existing fixed facilities has made it progressively easier to opt for subsea production systems that can be tied back to these platforms. Even in shallow waters, subsea and floater commitments will likely see their market share rise considerably over the next five years, although fixed platforms will still remain the dominant solution for shelf developments. 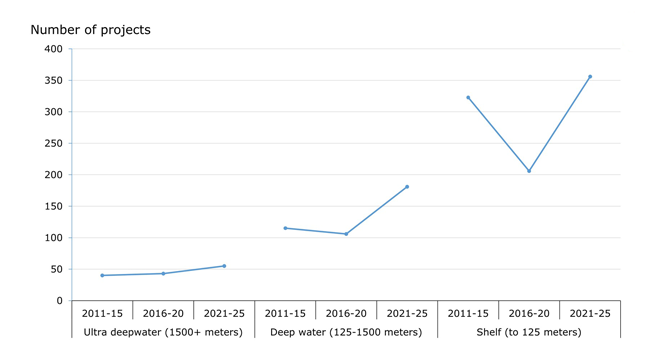 Ultradeepwater activity is expected to be concentrated in South America, with more than 50% of the total committed value, while the Middle East is likely to lead shelf developments with 40% of the total value. Deepwater investments are forecast to be less dependent on any particular region, with a quarter of greenfield expenditure expected in Europe.

In separate analysis of conventional oil and gas exploration, a Rystad Energy study found that the global success rate on conventional onshore wildcat wells reached an all-time-low of 10.6% in 2020, marking an annual decline for a fourth year in a row.

During the first half of the last decade, wildcat drilling campaigns had relatively high success rates of between 40-60% for onshore and 30-40% for offshore. Both onshore and offshore wells have seen a decline in success rates in recent years, but the drop for onshore wildcats since 2016 has been particularly alarming, according to Rystad. For offshore wildcat wells, it has been more of a hit and miss. The offshore success rate has fluctuated from 24.1% in 2018 to 28.6% in 2019 and 24.8% in 2020.

“The lack of availability of easily exploitable prospects, combined with (a lack of) exploration activity in once rich onshore areas such as the Middle East, have led to the decline in the onshore success ratio. Most of the easily mappable structural prospects with shallow reservoirs have already been thoroughly explored, leaving wildcatters to struggle primarily with technically challenging prospects,” says Palzor Shenga, vice president on Rystad Energy’s upstream team.

As a result, exploration activity is expected to focus on offshore areas, where prospects are associated with higher unrisked resources, especially in deep- and ultradeepwater areas. Although new reserves volumes found in 2020 exceeded 10 billion boe, only 12% of the wildcats had a volume potential greater than 250 million boe. Of these, 66% targeted reservoirs in deep and ultradeep waters, 20% were in onshore basins and the remaining 14% were in shallow waters.

Noting that the number of international wildcat wells has traditionally been higher in the onshore sector compared to offshore because of lower costs, with efficiency measures now reducing drilling costs offshore, the tables are turning. “The focus is now turning to offshore targets, supported by technological advancements, cost efficiencies and a much larger available selection of untapped areas,” concludes Shenga.