WASHINGTON–At 3.14 trillion cubic feet at the end of the last full week of October, lower-48 working natural gas stocks were 638 billion cubic feet below the five-year average of 3.78 Tcf, according to the U.S. Energy Information Administration.

The storage deficit is most pronounced in the part of the country with the greatest capacity to stockpile inventories: the seven-state South Central area. EIA says the region ended the 2018 refill season with the lowest stocks since 2005, when Hurricanes Katrina and Rita damaged Gulf Coast infrastructure and curtailed offshore natural gas production. The region includes Texas, Louisiana, Mississippi, Alabama, Oklahoma, Kansas and Arkansas (Figure 1). 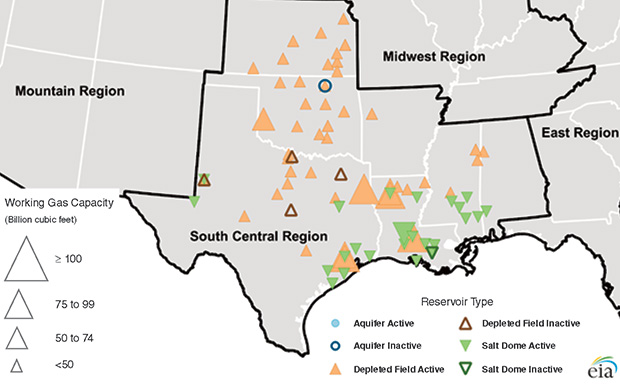 In late October, total South Central working natural gas stocks were at only 61 percent of capacity, or 21 percent below the historical average utilization of 82 percent, the agency reports. Working stocks at both high-deliverability salt cavern and conventional nonsalt facilities were well below the five-year averages.

Despite the historically low seasonal levels, EIA points out that the South Central region has the flexibility to rapidly inject natural gas. “The prevalence of salt natural gas storage facilities in the region could be a key factor in reducing this deficit,” an EIA report states. “As demonstrated earlier this year, this turnaround could come even during the heating season if market conditions permit.”

As of Oct. 25, working gas stocks in the region totaled 919 Bcf, or a deficit of 304 Bcf relative the five-year average, and accounted for roughly half the total deficit for the lower-48. By comparison, at the end of October 2017, the South Central region had 1.195 Tcf in storage. Regional capacity is 1.56 Tcf, comprised of 1.065 Tcf of nonsalt and 493 Bcf of salt storage facilities.

Significantly colder-than-normal temperatures at the start of 2018 across most of the lower-48 resulted in South Central storage inventories falling to 124 Bcf below the five-year average on Jan. 19. Six weeks later, however, the deficit had been reduced to only 7 Bcf, demonstrating the potential of salt storage facilities to rapidly replenish stocks, EIA points out. “Salt storage facilities in the region were able to inject natural gas into storage, even as withdrawals continued at nonsalt facilities,” the report notes.

But by the end of March, the deficit had increased to 112 Bcf, and net injection in the region fell further below the historic average during the spring and summer. According to EIA, key market factors contributing to the slow stock build during the refill season included:

Net injections into working gas in the South Central region typically continue until the second week of November, EIA says. If early-November net injections were on par with the five-year average, the agency projected that working stocks would total 959 Bcf on Nov. 9. That would have put inventories at nonsalt facilities at the lowest level ever reported in the 12 years that EIA has tracked regional volumes (712 Bcf), and stocks at salt facilities would have been at an eight-year low (247 Bcf) entering the winter heating season.

Meantime, EIA estimates that stocks in the second-largest storage region–the Midwest–ended the refill season at their lowest levels in four years, and below the amount in inventory at the start of the 2014-15 winter, after storage had been depleted by the large withdrawals associated with the infamous “polar vortex” weather pattern from January to March 2014.

As of Oct. 25, regional stocks totaled 934 Bcf, which was 12 percent below the five-year regional average and 13 percent below the year-ago level. Working stocks were at 77 percent of regional capacity, compared to a typical utilization of 89 percent.

EIA estimated that working gas stocks in the Midwest region would total 974 Bcf in the second week of November, when withdrawals typically begin. That would have put start-of-winter inventories 124 Bcf below the five-year average and 135 Bcf below the start of winter 2017-18.