ABERDEEN, UNITED KINGDOM–Marketing utilization for some offshore rig types in some regions of the world is nearly 85-90%, which Westwood Global Energy Group notes historically is the level at which day rates tend to trend upward at a more significant pace. According to data from its RigLogix intelligence platform, the firm says this may signal the start of a longer-term recovery.

By 2021, Westwood predicts, day rates will be at least 15% higher for rigs in operation.

“Currently, the ultradeepwater floating rig fleet is drawing a great deal of attention,” Westwood says. “Utilization of the 139-rig marketed fleet stands at 76.9%, with 107 units working or committed, and one-third of those are contracted into 2021 or later.”

Looking ahead, the company says its RigLogix rig requirements function shows that there are more than 200 drilling programs worldwide planned during the next three or four years that designate either a semisubmersible or drillship to be used. The Norwegian North Sea, South America and Africa are among the regions expected to see high rig demand.

Westwood warns that while some regions show positive signs of recovery, overall activity for the entire rig fleet is taking time to recover. So far, it says 2019 utilization growth has been encouraging, but there still is room for improvement. Overall working, marketed jackup utilization now is nudging 70%, compared with 60% only a year ago.

According to the firm’s survey, notable signings have been made in several regions in 2019. Operators in the Golden Triangle of the U.S. Gulf of Mexico, South America and West Africa have chartered rigs, including a few at new market-high days rates exceeding $200,000. The survey points out although some of these fixtures include contract add-ons such as managed pressure drilling equipment or integrated services, the numbers have been a welcome relief for rig owners. Westwood adds that several jackup contract signings in Southeast Asia have topped $80,000, a level not seen there in several years.

Some rig owners will operate a rig at a lower day rate for a contract in a region with the hope of securing additional work once it is there, Westwood observes. In addition, with so many rigs idle, the company says rig owners now routinely bid rigs for work in other regions, and in some cases, far from where the rig is located.

“After an extended downturn, the market is watching closely to see when improved utilization will yield higher day rates. There certainly are significant reasons to be hopeful,” says Steve Robertson, head of rigs and wells at Westwood Global Energy Group. “In some areas, day rates already are hitting more than $200,000, and continued demand for specific types of rigs such as ultradeepwater jackups is good news for industry. The fact some operators are committing to rigs far in advance is a clear sign they are anticipating future day rate rises.”

After several years in the doldrums, oil and gas service companies are beginning to flex their muscles again by raising prices for their products and services, according to Rystad Energy.

Like the upstream operator community, the service sector became more fragmented during the depths of the downturn in 2015-16, with the larger service firms losing market share to smaller firms, Rystad’s analysis shows.

The largest service companies outgrew their smaller counterparts until the fourth quarter of 2015, at which point they began to lose market share to the smaller players, the report reveals. In 2017 and 2018, market concentration was lifted by several major merger and acquisition deals in the industry, but just as importantly, the “big four” service companies–Schlumberger, Halliburton, Baker Hughes, a General Electric company, and TechnipFMC–were able to win back market share, Rystad says.

“Even though the oil field service market has become more concentrated at the same time as the buyer side has become more fragmented, there are also other factors which impact pricing power. Some segments, despite being more concentrated, are still heavily challenged by oversupply, forcing companies to adjust their capacity before prices improve,” remarks Audun Martinsen, head of oil field service research at Rystad Energy.

Nevertheless, he says oil and gas investments are on the rise, and so too, is the pricing power of service companies. “After losing pricing power in 2015 and 2016, service companies have since regained some of the lost ground, thanks first and foremost to industry consolidation among players that has concentrated the market over the past couple years,” Audun states.

“Pricing power is likely to be further strengthened within the service industry, as orders are anticipated to rise across the supply chain, coupled with capacity adjustments intended to avoid oversupply in 2019-20,” he adds.

A separate report from Rystad Energy shows that Gulf of Mexico oil production is poised to set new records, driven in part by Shell starting production at its Appomattox deepwater platform several months ahead of schedule.

“With earlier-than-planned production, Appomattox will be a key growth contributor to help push U.S. Gulf oil production toward a new record high before year’s end,” says Joachim Milling Gregersen, an analyst on the company’s upstream team. 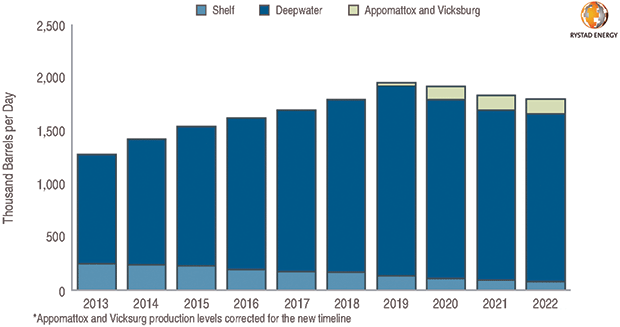 As shown in Figure 1, Gulf oil production averaged a record 1.79 million barrels a day in 2018, up from 1.28 million bbl/d five years earlier in 2013. For 2019, oil output is forecast to average 1.95 million bbbl/d, with some months potentially touching 2 million bbl/d, according to Milling Gregersen.

“The torch has been carried by large deepwater fields, of which Appomattox is the latest contribution,” Milling Gregersen adds, noting that the Appomattox platform–Shell’s largest floating production system in the Gulf–will host the adjacent Appomattox and Vicksburg fields and reach plateau production of 140,000 barrels of oil equivalent a day.

Looking at expectations for global offshore project sanctioning, Matthew Fitzsimmons, vice president of Rystad Energy’s oilfield service research division, says sanctioning activity has been on the increase and is expected to cause a 10-15 percent rise in offshore unit prices by 2022.

However, accelerating the sanctioning of new projects can lead to less certainty of what the ultimate cost of any given project will be, he notes, adding that projects with high levels of “engineering definition” are generally expected to remain within 20 percent of the initial cost estimates.

“For offshore operators, that means the expected variation for projects to be sanctioned during the period from 2019 to 2023 could be as high as $220 billion,” Fitzsimmons reports. “Historically, the ability of operators to perform to their estimates has significantly impacted their subsequent sanctioning.”

To manage inherent sanctioning risk, he says operators are delaying final investment decisions in order to mature the engineering definition. “This will lower the uncertainty that their funding estimates will carry,” Fitzsimmons remarks. “Failure to do so will not only have an adverse impact on the operator’s ability to control cost overruns, but also the minority share owners of the field.”