HOUSTON–According to a new study from IHS, the phenomenal growth of shale oil and gas plays in the United States makes possible several reuse options that otherwise would not exist for the Sunoco Marcus Hook Industrial Complex, a former oil refinery on the banks of the Delaware River south of Philadelphia that was shut down in December 2011.

When operational, the 780-acre refinery processed 175,000 barrels of crude oil a day into a wide range of petroleum and petrochemical products, and was responsible for nearly 500 direct jobs in Delaware County, Pa. One of the nation’s oldest refineries, it had been in operation for 109 years, and had employed several generations of workers from the region.

“We identified several possible reuse options for the Marcus Hook facility, and what is interesting is that most of these opportunities are possible only as a result of the recent phenomenal growth of U.S. oil and gas shale plays,” says Brendan O’Neil, managing director for IHS Consulting. “Without these plays, the options available to Marcus Hook would be more limited, and if pursued, could potentially provide an economic ‘second life’ to the complex, which has been a part of the Delaware County community since 1902.”

IHS was commissioned to conduct the independent study by the Delaware County Council, which appropriated funds and directed the county’s Industrial Development Authority to undertake the study. Its purpose is to identify potential future redevelopment concepts that can best utilize the site’s assets to maintain employment levels and perpetuate a sustainable local economy in Delaware County and the East Coast region.

“Despite the fact that it does not own the site, the Delaware Council was very proactive in seeking an independent assessment for reusing this facility, which may serve as a model for other communities that are likely to face similar industrial shutdowns in the future,” remarks O’Neil. “It shows a willingness to bring industry and community together to solve problems and to create economically sustainable development.”

In compiling its assessment, IHS says it first conducted a regional economic profile and followed with a supply/demand analysis of the markets for potential alternative uses based on two broad categories: energy products storage and Marcellus Shale-based downstream chemical production. 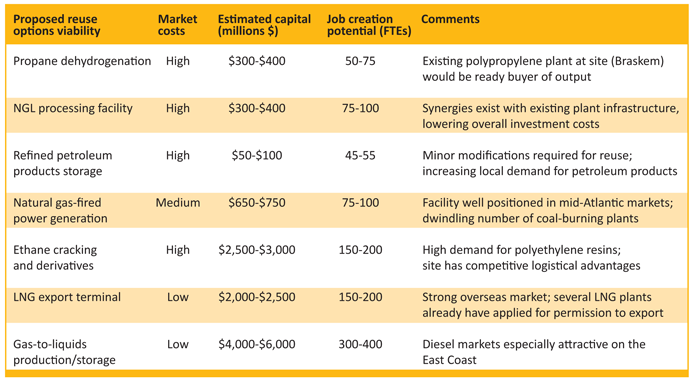 Table 1 summarizes the options analyzed, the market viability of each scenario, estimated capital costs and job creation potential. While the market analysis of the seven reuse options all showed promise, IHS says the study revealed that some options had greater viability than others.

The East Coast is advantaged, the report notes, in that it lays adjacent to the large Marcellus Shale development area, despite the fact that production from this region contains only minor crude oil and condensate production.

While deeper analysis is needed to fully discern the potential rate of return on capital of the repurposing options, IHS points out that the reuse of Marcus Hook for shale-based chemical processing, natural gas liquids processing, and refined petroleum storage suggest the greatest market potential.

“This refinery is the primary economic engine that has supported the region for decades, so the future of this community is dependent on our ability to identify and facilitate new, economically sustainable uses for the site,” says Tom McGarrigle, chairman of the Delaware County Council. “We are pleased with the findings of the study, because they offer some viable, positive paths forward for the Marcus Hook complex and for our communities in Delaware County.”

The significant growth in domestic natural gas reserves and production from shale plays provides an affordable, long-term supply to U.S. industrial and petrochemical users, suggests Anthony Palmer, managing director of IHS Chemical. “With the recent shale developments and the abundance of ‘cheap’ natural gas, the United States now has a feedstock cost advantage over most other regions of the world for producing certain petrochemical products, such as ethylene or propylene,” Palmer says. “Both of these are possible products that the Marcus Hook complex could deliver with modifications.

“Another reuse option for Marcus Hook is for refined petroleum product storage, which could leverage the site’s five underground granite caverns for liquids,” Palmer goes on. “There are some infrastructure issues that would need to be addressed for each of the proposed uses studied, and a more in-depth assessment would certainly need to follow, but these options are viable.”

Hope For Other Facilities

And according to Palmer, the study also may offer hope to other communities that are home to aging refineries like the Marcus Hook complex, which also are facing closure because of a host of factors that have impacted demand and profitability for refined petroleum products.

“Unfortunately, many East Coast refineries are located too far from key sources of feedstock production to be cost competitive,” Palmer states.

According to the IHS study, of 11 East Coast refineries, only six are in operation, and one of those six, the Sunoco Philadelphia facility, is for sale. Unless a buyer is found soon for the refinery, it is expected to shut down later this year, IHS notes. The ConocoPhillips Trainer refinery in Pennsylvania also was shut down in 2011, but is scheduled to restart at the end of 2012 by new owner, Monroe Energy. Combined, these three Delaware River corridor refineries produce nearly 700,000 bbl/d of refined products, or 50 percent of the total East Coast region’s refining capacity, which includes facilities from Maine to Florida, the report notes.