BOEM reports that 56 oil and gas companies submitted 593 bids on 454 leases covering more than 2.4 million acres offshore Louisiana, Mississippi and Alabama in water depths ranging from 10 to more than 11,200 feet. The sum of all bids received at the June 20 sale was $2.6 billion. BOEM estimates that the economically recoverable hydrocarbons that could be produced as a result of the acreage offered ranges from 800 million to 1.6 billion barrels of oil and 3.3 trillion to 6.6 trillion cubic feet of natural gas. 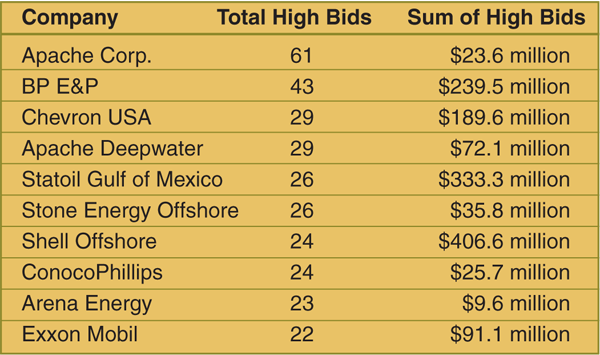 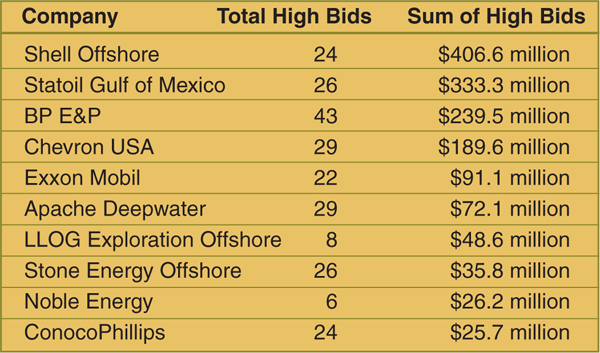 “The Shelf and deep water are both important for us, and I think our bids reflect that,” says Jon Jeppesen, executive vice president for Apache’s Gulf of Mexico operations. “The deep water is expensive and you have to compete against the big boys. Even the minimum bid amounts set by BOEM are higher. However, we see tremendous potential in the deepwater Gulf, especially for oil.”

Apache separates its deepwater and Shelf operations at 500 feet of water, mostly because that is typically the water depth at which rigs change from jack-ups to semisubmersibles, Jeppesen notes. Other than rigs, however, he adds that the two divisions buy support equipment and services in common.

Jeppesen says he was not surprised by Apache’s results from the lease sale. “We got about what we expected, but we had been preparing for this sale for two years. We were able to acquire additional seismic in that time and we did a lot of reprocessing of existing data. We definitely put a bigger effort into this sale. We added a lot of capacity in geology and geophysics.”

The leases on which Apache was apparent high bidder were concentrated in areas near its current operations, but the company also was willing to venture into new territory. “We focused on existing production areas, or at least areas in which we already had a foothold, but we also stepped out into new areas. On the Shelf, our concentration was on the Main Pass area, and we got 19 of the 23 blocks we bid on,” Jeppesen points out.

The step-out areas were in both deep water and on the Shelf, Jeppesen adds. “There was no speculative acreage in deep water. All our bidding involved identified prospects. That said, we will not drill every block. We will continue to high grade and see what comes to the forefront. Some of the shallow-water blocks in the Main Pass will rise quickly. Others in Main Pass will be subjected to proprietary seismic, which will take at least two or three years to shoot, process and interpret.”

Having a deep inventory of prospects is fundamental to long-term success in the Gulf, but Jeppesen says the availability of deepwater-rated rigs is a challenge. “We are sharing one rig with Anadarko Petroleum Corporation and Noble Energy, and are looking to contract another rig for next year. Rigs are very tight in the deep water,” he observed in July. “We hope and expect to see more deepwater rigs coming into the Gulf soon.”

Jeppesen says he was cheered by the number of bidders of all sizes, and also by the amounts offered. “Thanks to advances in seismic and drilling technology, the Gulf of Mexico continues to be reborn. We have better imaging for deeper horizons and there is tremendous oil potential in the deep water. The size of the prize keeps getting bigger, and that keeps us focused on the Gulf,” he concludes.

McMoRan Exploration accomplished a rare feat as the apparent high bidder on all 14 of the Outer Continental Shelf blocks on which it tendered bids. Chief Executive Officer James “Jim Bob” Moffett reports that six of the 14 bids were sole bids by McMoRan, and the remaining eight apparent high bids were made jointly with Chevron U.S.A. McMoRan will pay $3.1 million in total bonuses for the 14 leases.

The blocks are in the Vermilion, South Timbalier, South Marsh Island and Eugene Island areas, and are targeted in and around McMoRan’s ongoing ultradeep Shelf exploration program in the shallow-water Shelf, Moffett notes. If certain wells drilled on these lease blocks are completed to depths exceeding 19,999 feet, they may receive royalty suspension volumes of 35 billion cubic feet of natural gas, he adds.

“We are still in the process of testing the Davy Jones well (located in 20 feet of water at South Marsh Island Block 230),” says Moffett. “When that work is complete, we will make a decision on where we will go with our ultradeep Shelf drilling program. If we have this thing figured out, it opens the whole ultradeep trend below the salt weld on the Shelf. At this point, however, there is not a lot of information (other than) the work we have been doing.”

If ultimately awarded after the BOEM completes it fair market value assessment of high bids at Sale 216/222, Moffett says the 14 leases will add more than 65,000 gross acres to McMoRan’s 900,000 gross-acre leasehold in the Gulf, including more than 200,000 gross acres associated with the ultradeep play on the shallow-water Shelf.

“We need more experience and more well control in the deep plays at 20,000-30,000 feet below the seafloor, both in deep water and on the Shelf. Some of us are drilling a lot deeper than anyone expected we would be able to go. That is the real trend over the next few years. The Gulf of Mexico can be very prolific, but it has been misunderstood. There is a lack of information in the deep water and in high-pressure geology at greater depths.”

LLOG is a prime example of the new breed of smaller, privately held operators that are running with the big dogs in the Gulf. “We have production in deep water and on the Shelf, as well as a small percentage on land,” says Eric Zimmermann, a geologist with the company. “We now have roughly 25,000 barrels equivalent of oil production a day, and that is slanted primarily toward deep water. Over the past year, we have put three deepwater fields on production.”

Among those deepwater fields are Who Dat in Mississippi Canyon Blocks 503/504/547 and Mandy in Mississippi Canyon 199. “We are ramping up production and expect to continue to increase our daily production volumes from these properties. We have a multiyear development plan for these discoveries as well as several exploration prospects scheduled to drill in the near future,” Zimmermann relates.

LLOG was successful on eight of its 15 bids at Sale 216/222. “We hit all the goals for our program at the sale,” Zimmermann says. “We were high bidder on key ‘protection’ blocks in eastern Mississippi Canyon, and also increased our high-quality amplitude inventory in deep water.”

One of the leases strengthens LLOG’s acreage position around its Who Dat complex, where late last year it commenced production from its first deepwater floating platform stationed at Block 547. Later this year, Zimmerman says, LLOG plans to bring on its Goose subsea tieback at Mississippi Canyon 751 and continue to develop Who Dat. Work on the new leases will not begin until next year.

Noting the range of big and small, public and private, integrated and independent companies that were active at the sale–both on the Shelf and in deep water–Zimmermann points out that the Gulf offers opportunities for all sizes of players. “We have been active in the deep water for 10 years, but as the trend matures, the opportunities for independents to participate increase. That has been true on the Shelf over the years, and it is also the case in the deep water.”

He adds that Sale 216/222’s record results did not come as a surprise to LLOG. “It had been 27 months between Central Gulf lease sales, so there was a great deal of interest,” Zimmermann states. “We expected it would be a very competitive sale. Given the dynamic nature of the Gulf over the past two years, everything came together to drive the results.”

Energy Partners Ltd. (EPL) was the high bidder on six leases covering 27,148 acres on a net and gross basis. All are in the shallow-water Shelf within the company’s core area of operations, reports Gary Hanna, president and chief executive officer.

EPL’s share of the high bids totals $7 million. The six leases include three within the Main Pass area, two within the West Delta area, and one adjacent to its South Timbalier 41 Field. “Overall, the lease sale played out about how we anticipated,” Hanna says. “We expected some pent-up demand, but the sale went well for us. We got the blocks we most wanted, and the three we did not get were really just protection acreage.”

According to Hanna, EPL is producing 9,000-10,000 boe/d from its existing fields. “We expect to begin working on some of the blocks on which we were high bidder next year, but I would say the lion’s share of the drilling will be done toward the end of 2013 and into 2014,” he projects. “We are excited about the potential of these blocks.”

One of the most obvious differences between focusing on Shelf properties as opposed to deepwater tracts is the size of the lease bonuses, Hanna notes. “The big checks always are written in the deep water,” he says, “There was nothing really out of line either on the Shelf or in deep water. The bids were all relatively within the norms, there was just a lot of activity because of the pent-up demand.”

TJ Thom, EPL senior vice president and chief financial officer, concurs. “We did not know exactly how the sale would play out after the time off. We were playing catch up a bit, but for us, lease bids fall under acquisition dollars, which are unbudgeted,” she remarks. “We comb the basin every day for opportunities in leases others might already have.”

That is consistent with the company’s core strategy, Hanna adds. “We expanded our core holding, stayed close in, and look forward to exploiting that over the next few years. But we also are clearly acquisitive across our basin. This year, we were able to take some rifle shots, as opposed to more of a shotgun approach across the basin. A lot of the data on which we based our bidding came from a regional study conducted over the past six to nine months.”

Thom notes that EPL’s production is 80 percent liquids, and that the company has been seeing relatively stable demand for its Louisiana light sweet crude production, and also is enjoying a fairly consistent premium to West Texas Intermediate. “The differential to WTI has bounced around a bit, but we are back in parity with Brent,” she says.

Katie Potter, U.S. division lead for exploration and production at U.K.-based NES Global Talent, says, “No one went away unhappy from this lease sale. BOEM got record participation and bids, Statoil and ConocoPhillips are going to be very active for years, and Apache did very well, as did several smaller independents.”

Potter notes that while there were some large bids, overall there were plenty of uncontested leases as well. “There were a lot of bids in areas where companies had been successful in the past. In some cases in the deep water, the high bids were whole orders of magnitude larger than the second highest bids. The hottest area was in deepwater Mississippi Canyon, which is a proven productive area.”

Looking ahead, Potter says the challenge will be to bring the resources to market. “Going from exploration to production is always the trick,” she states. “But with the extra year to acquire and reprocess seismic and make plans, no one should have bid on blocks they did not feel strongly about and have long-term plans for. In many cases, all the data needed to make drilling decisions would have been in hand.”