MORGANTOWN, W.V.–Multiple sites along the Ohio and Kanawha rivers have the subsurface geological features for the natural gas liquid storage facilities needed to attract petrochemical and related industries to the West Virginia/Pennsylvania/Ohio region, concludes a study by the West Virginia University Appalachian Oil & Natural Gas Consortium.

“Having NGL storage capacity in the greater region is critical to fully realizing the potential of the shale gas resources found in our three states,” says David Ruppersberger, president of the Pittsburgh Regional Alliance. “Shell’s decision to build a world-scale petrochemical facility here is game-changing, and shines a spotlight on fresh opportunities in this part of the country. Natural gas storage will do the same–position us to attract additional ethane crackers and other petrochemical investments.”

The analysis, “A Geologic Study to Determine the Potential to Create an Appalachian Storage Hub for Natural Gas Liquids: Final Report,” was led by WVU and the Eastern Petroleum Technology Transfer Council. It used the geological surveys of those three states to help determine how best to capitalize on the region’s Marcellus and Utica shale wells.

Consortium researchers studied potential options for subsurface NGL storage along and adjacent to the Ohio River from Southwest Pennsylvania to eastern Kentucky, with a similar study along the Kanawha River in West Virginia. The group says this involved mapping and identifying areas where:

“Appalachia is poised for a renaissance of the petrochemical industry because of the availability of natural gas liquids,” says Brian Anderson, director of the WVU Energy Institute. “A critical path for this rebirth is through the development of infrastructure to support the industry. The Appalachian Storage Hub study is a first step for realizing that necessary infrastructure.”

Production in the Marcellus and Utica shale plays has grown from 3 billion cubic feet a day in 2010 to more than 24 Bcf/d in 2017, the report states, with forecasts of 40 Bcf/d in five years. Sweet spots in eastern Ohio and northern West Virginia are areas of wet gas production, and contribute as much as 40 percent of the region’s total output. These NGLs, especially ethane, have the potential to impact the petrochemical industry considerably, the consortium predicts. 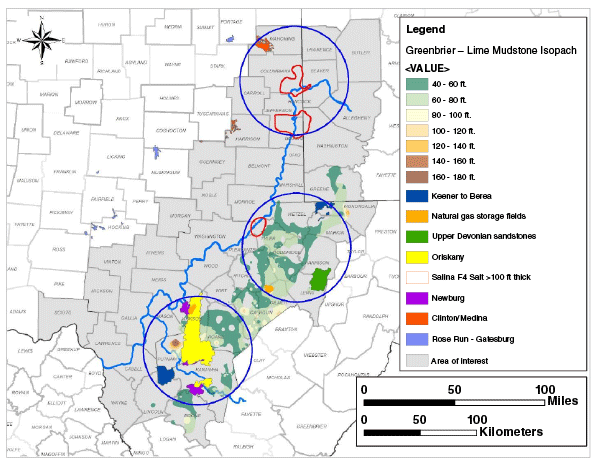 To exploit this resource instead of leaving it in the gas stream for sale, state officials in West Virginia, Ohio and Pennsylvania are supporting a high-technology program for economic development by creating the infrastructure needed to build petrochemical facilities across the region, including NGL pipelines and storage sites. This study focuses on possible locations for the necessary Appalachian Storage Hub (Figure 1).

According to the report, researchers were especially interested in locations offering stacked opportunities for NGL storage–sites with multiple subsurface geologic formations or intervals at different depths within a given geographic footprint. It says those stacked opportunities provide many benefits, most notably flexibility with respect to the amount and kind of products that potentially could be stored at a site and the placement of pipeline infrastructure relative to a site’s footprint.

“In addition, stacked opportunities may reduce risks related to site acquisition and/or access to subsurface mineral rights and pore space, and could offer economies of scale relative to site preparation, number of wells to be drilled, and logistics,” the report notes. “Finally, the availability of multiple storage options in a given area allows an operator to tailor its underground storage portfolio to suit its business needs, financial position and any potential environmental safety concerns.”

Along with a list of candidate sites, WVU notes, the study also produced a detailed reservoir characterization effort with field-level studies, rating criteria used to screen the locations and a final ranking of all storage candidates as well as a publically accessible website that holds all generated data and analysis.

The researchers recommend a combined engineering-geologic study as the next step needed to advance the Appalachian Storage Hub project. They say the study will lead to a detailed feasibility and economic evaluation of one or more of the site-specific storage candidates, taking into account surface and subsurface factors.