WASHINGTON–According to the National Oceanic & Atmospheric Administration, most of the United States is expected to experience hotter-than-normal temperatures this summer–from New York to Los Angeles, Miami to Seattle, and Chicago to Anchorage.

“Above-normal seasonal mean temperatures are most likely for the eastern United States, across the southern states, and west of the Rocky Mountains. The greatest odds are indicated for parts of the Southwest, the Gulf Coast, and the Atlantic Coastal regions. Above-normal temperatures also are favored for much of Alaska,” NOAA says in its 2017 Summer Outlook, noting that even Hawaii has a high probability of much warmer-than-usual summer weather.

Figure 1 shows the NOAA temperature forecast map for June, July and August. The colors show the areas where the chances of a warmer-than-average summer exceed 33 percent. The darker the color, the greater the chances of hotter temperatures. The Great Plains and northern Rockies (shown in white) are the only sections of the country where the NOAA forecast calls for equal possibilities of a colder-than-normal, near-normal, and hotter-than-normal summer. 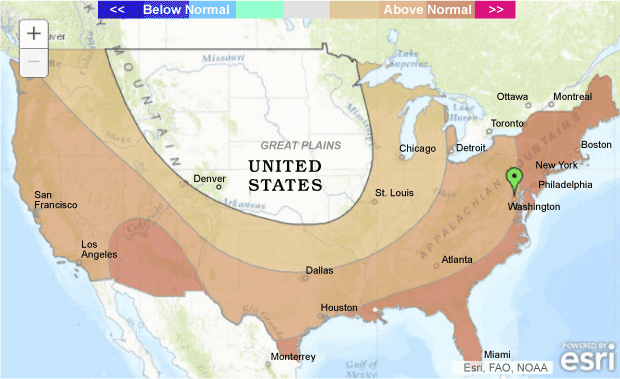 The agency defines “well above” as ranking in the upper one-third of the 30-year average of June, July and August temperatures recorded between 1981 and 2010. “A couple of degrees difference in the summer average is likely to smooth out a big difference in daily heat extremes,” NOAA states.

The American Gas Association, which begins tracking the U.S. cooling season at the start of May, reported that temperatures had already averaged 33 percent warmer than normal through the first three weeks of the month, particularly in the Middle Atlantic and Northeast regions. “Only the Mountain region was cooler than normal,” AGA says.

The springtime warmth was reflected in EIA data for the third week of May, which showed six fewer heating degree days but 30 more cooling degree days than the historic average. “In particular, the South Central region, which can have considerable gas-fired electric generation demand, reported warmer-than-normal temperatures,” EIA explains, noting that the warmer temperatures resulted in increased power burns. “Temperatures in the East South Central division averaged 4 degrees Fahrenheit higher than normal, and temperatures in the West South Central division averaged 2 degrees higher than normal.”

The agency says coal-fired generation declined by more than 60 percent in nine Northeast states over the 10-year period, falling from 31 to 11 percent of total generation. While Pennsylvania continues to be a leading coal generator nationally, the commonwealth’s coal-fired output fell 31 percent (68 million kWh) between 2006 and 2016. Meantime, EIA points out that Pennsylvania was expected to add 1.8 gigawatts of new gas-fired capacity between 2016 and 2018 alone. Nationwide, 18.7 gigawatts of new natural gas generation capacity were on track to enter service between 2016 and 2018.

For the week ending May 24, the 2.44 Tcf of working gas in storage was 371 billion cubic feet (13 percent) lower than last year at the same time, but still 241 Bcf (11 percent) above the five-year average, EIA reported. For the same week, the agency said total U.S. dry natural gas production was 70.9 Bcf/d, down 1 Bcf/d from one year earlier and 3 Bcf/d from two years earlier.