By Ding Zhu, A. Daniel Hill and Shuang Zhang

With fiber optic DTS measurements, downhole temperature can be measured during fracturing, shut-in and production to provide continuous and integrated information over the life of the well. Integrated DTS interpretation provides information on fracture/flow distribution to provide key insights into what happened during fracture treatments, identify problems in treatment design and execution, and improve the efficiency of multistage fracture stimulation.

The key component of using temperature measurements for fracturing diagnosis is the interpretation model. A new temperature interpretation model has been developed for fractured well diagnosis to understand flow distribution for multistage fractured horizontal wells using both DTS and conventional production logging tools (PLTs). It uses mathematical models built on mass, momentum and energy conservation of each component (reservoir, fracture, well completion and wellbore) in the system, and the components are linked through boundary conditions.

Using this approach, assumed properties of the flow field are input to generate pressure, velocity and temperature distributions. There are three steps in the interpretation procedure workflow. After initial evaluation to eliminate the nonproducing clusters and roughly assign the flow rate to reduce the computation time, the models are used to calculate the temperature distribution and compare the calculated temperature with the measured temperature. When the temperature is matched, the last step is confirming that the total rate interpreted is consistent with the surface-measured rate.

The core procedure in the interpretation workflow is the second part, local temperature matching. The objective is to match the simulation temperature with the measured temperature at each producing fracture location. This is performed independently fracture by fracture. A gradient-based inversion algorithm method is used to invert the flow profile from the temperature measurements.

Field cases from the Eagle Ford and the Marcellus shale formations illustrate how these models can be used to generate fracture/flow distribution in multistage fractured horizontal wells. The Eagle Ford well used temperature measurements from PLTs, and the Marcellus well used DTS measurements from a permanent fiber optic cable installed in the wellbore. The results show that temperature measurement is a comprehensive tool for fracture diagnosis.

The interpretation modeling approach was first applied to interpret data acquired by PLTs during the production of an Eagle Ford gas well. The well was fractured with 15 stages and each stage had four clusters. The fracture spacing was 77 feet (75-foot cluster spacing with a two-foot perforating zone). Figure 1A shows the Eagle Ford well’s trajectory and Figure 1B shows the Marcellus well’s trajectory. Each triangle along the well represents the location of a perforation cluster and each fracture stage is color-coded. 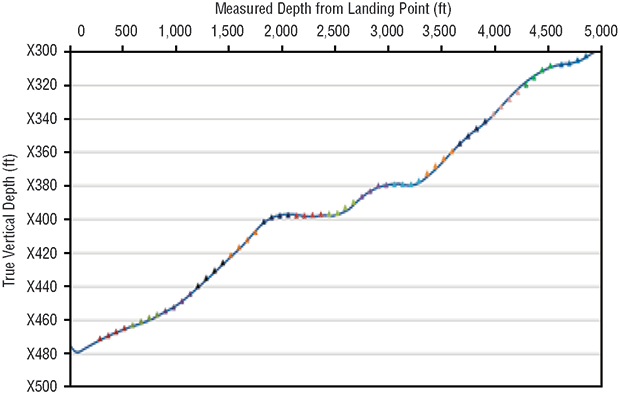 After the fracture treatment, the well was producing 1,600 Mcf a day. The water production rate was 160 barrels a day with a surface gas-to-oil ratio of 9,000:10,000 cubic foot/bbl. Since liquid production was less than 10 percent of the total volume according to the pressure-volume-temperature (PVT) properties, single-phase gas production was assumed for interpreting the temperature data. To account for the influence of liquid on heat transfer, the average heat conductivity based on the gas to oil ratio and water cut was used in the modeling.

The well trajectory made interpretation difficult. The flow in the wellbore is two-phase even though the reservoir is treated as a single-phase problem. The general upward trajectory with several low spots along the well results in complicated multiphase flow phenomena. The trajectory also directly influences the geothermal temperature at the wellbore location, which also is an important interpretation parameter. 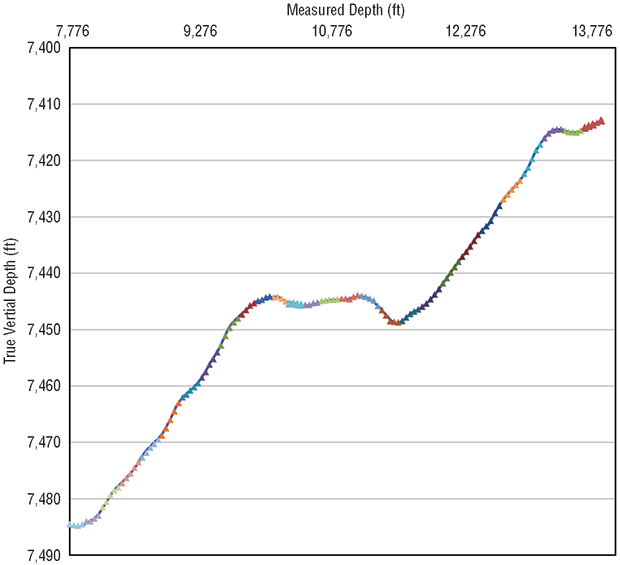 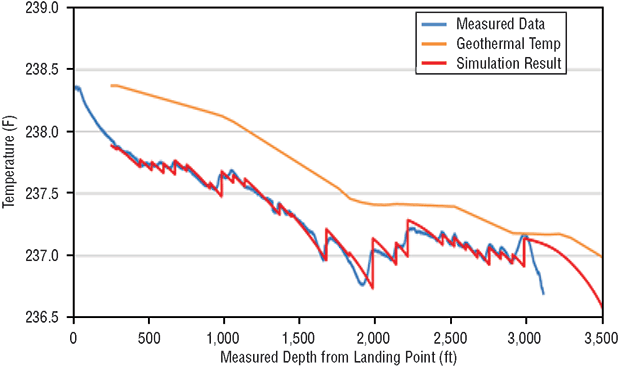 The magnitude of temperature drop at each perforation location indicates the amount of gas entering the wellbore, although the relationship is highly nonlinear. The well has no perforations from 2,291 to 2,370 feet. The temperature through this section increased, which correlates with the fact that no fractures had been created. 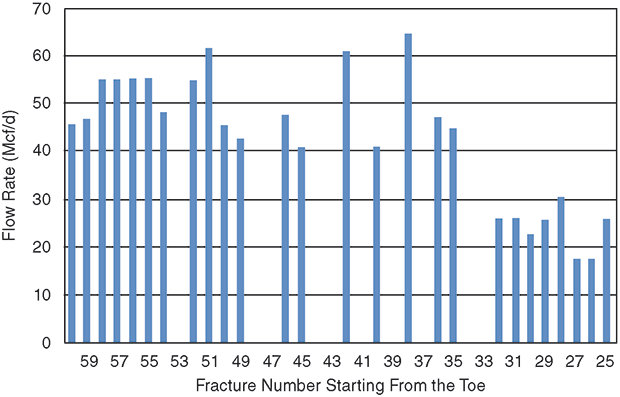 The second example illustrates using DTS data to interpret flow rate distribution from a Marcellus Shale well. The data were measured by a fiber optic sensor installed permanently outside the casing in the MIP 3H well, which is part of the Marcellus Shale Energy & Environment Laboratory (MSEEL) project near Morgantown, W.V.

The well was producing 1.83 MMcf/d of gas and 0.78 bbl/d of water at 180 days of production. Since the water production was minuscule, single-phase gas production was assumed for temperature data interpretation. The fracturing treatment had 28 stages, with four or five clusters per stage, for a total of 133 clusters. 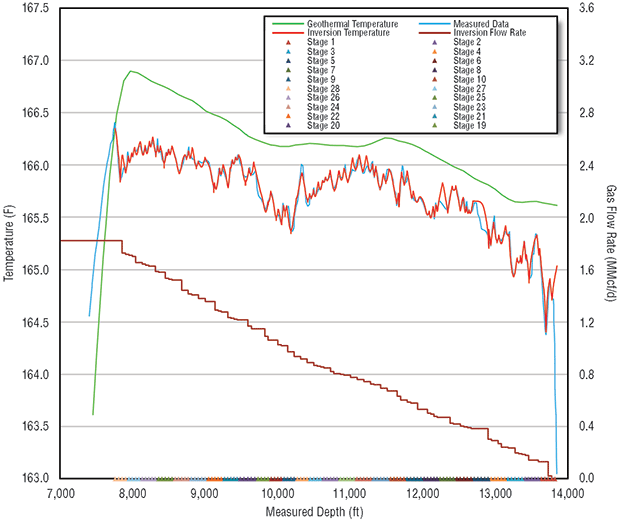 To improve interpretation efficiency, a strategy was applied to eliminate clusters that were not contributing to gas flow by examining the temperature derivative before interpretation. This can reduce the size of the problem that will be solved and save interpretation time. The measured temperature data are represented by the blue curve in Figure 3, which shows the inversion results from the second step in the modeling process. The inversion temperature, represented by the red curve, matched the measured temperature satisfactorily. The brown curve is the inverted production rate along the wellbore. The inverted total flow rate is 1.82 MMcf/d, which matches the measured total flow rate of 1.83 MMcf/d with a difference of 0.5 percent.

As noted, temperature decreases at the gas entry locations, but if a perforation location has no gas inflow, the temperature increases because the surrounding reservoir’s higher temperature warms the flow stream as it passes. This results in a negative temperature gradient from upstream to downstream.

Based on this principle, temperature derivative analysis indicated a positive gradient for 78 of the 133 clusters (60 percent cluster efficiency). The interpretation only needed to invert these 78 producing fractures, instead of all 133.

From the initial elimination, non-uniform initial guesses of flow rate were assigned to each producing fracture based on the magnitude of the temperature change. Figure 4 also shows inversion results from the second step in the modeling process. In this case, the initial flow rate guess for each fracture is shown along with the inverted flow rate profile for each fracture. It is observed that the middle stages (11-15) produce less fluid. The initial guess provides a reasonable estimation.

Initial ‘Guess’ and Inversion Flow Rate Profile for Each Fracture 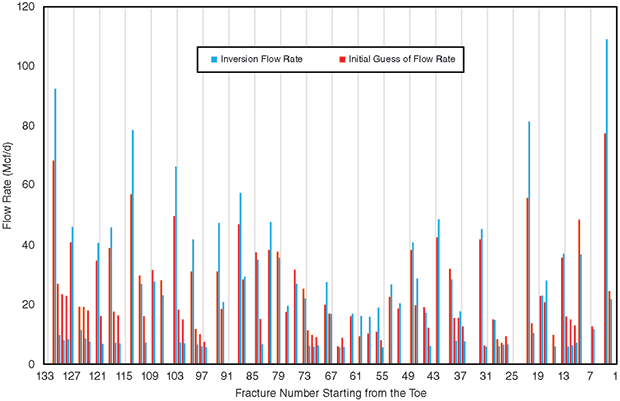 Well trajectory, completion and treatment execution all have strong impact on temperature behavior, and should not be overlooked when interpreting flow distribution. The benefits of using DTS measurements for flow interpretation is the temporal-continuous measurements, which can be used to confirm the interpretation, and importantly, confirm that the production from the well is not disturbed while measurements are made.

DING ZHU is a professor and holder of the Peterson Professorship in the Harold Vance Department of Petroleum Engineering at Texas A&M University. Her research areas are production engineering, well stimulation, intelligent well modeling and complex well-performance optimization. A distinguished member of the Society of Petroleum Engineers, Zhu is co-author of three text books and is an associate editor of SPE’s Production & Operation Journal. She holds a B.S. in mechanical engineering from the University of Science and Technology in Beijing, and an M.S. and Ph.D. in petroleum engineering from the University of Texas at Austin.

A. DANIEL HILL holds the Noble Endowed Chair in the Harold Vance Department of Petroleum Engineering at Texas A&M University. He previously taught for 22 years at the University of Texas at Austin. He is the author of the SPE monograph, “Production Logging: Theoretical and Interpretive Elements,” and is co-author of a textbook on petroleum production systems and a book on multilateral wells. A distinguished SPE member, Hill serves on several SPE committees. He holds a B.S. in chemical engineering from Texas A&M, and M.S. and Ph.D. degrees in chemical engineering from The University of Texas at Austin.