DENVER–The U.S. economy has bounced back from its deepest recession in 70 years, and its strength is carrying the rest of the world with it, says an economist from Canada’s export credit agency.

“I believe the global economy, led by the U.S. economy, has entered a new cycle,” says Stuart Bergman, assistant chief economist at Export Development Canada and a representative to the Organization for Economic Cooperation and Development. “The recovery is here and it is real.”

For the past year, economic forecasts have signaled rough seas for the recovery because of alarming headlines and market volatility, Bergman notes. “With all the unrest around the world, from the Ukraine to Ebola to the Islamic State, people are asking whether we really have turned a corner on the great recession,” he reflects.

In early 2014, Bergman observes, most economic forecasts concurred with the OECD’s view that the U.S. economy would grow about 3 percent. Then, later in the year, “We started to see forecasts that predicted a turn for the worse,” he says. “That created plenty of panic and gyrations in the market, but those forecasts were based on temporary factors, including weather and healthcare-related expenses, and so were not reliable.”

Speaking at the monthly Denver Energy Finance Discussion Group breakfast in January, Bergman said that despite the low-price concerns that had spread across the domestic oil industry, North American and global economies were strong and the outlook was promising.

“I am here to tell you: Relax, it’s going to be OK,” Bergman assures.

Without a doubt, the effects of the global recession in 2008 and ’09 caused a massive amount of restructuring in financial markets, notes the economist.

In developing forecasts, economists don’t rely on political developments and daily movements in commodities, Bergman relates. “We look at the long-term fundamentals so we can tell our clients where we are and where we should be, given those fundamentals,” he explains.

Bergman says economists rely on the OECD as an important source of information. Its summary of leading indicators, he says, is significant because it provides a consistent view of global economic activity over the prior 10 years.

“Six years ago, the failure of Lehman Brothers and other events led to dire predictions of the utter collapse of the global economy,” Bergman recalls. “As a result, unprecedented amounts of cash were shoveled into the economy as a stimulus. That gave us the illusion of recovery and fairly impressive growth. But the next thing you know, all we heard about was the dreaded double-dip recession.

“If you recall, 2011 was a difficult year,” Bergman continues. “There were floods, earthquakes and tsunami that pretty much ruined any chance of a continued recovery, and the global economy stayed flat.”

Since then, the leading indicator index shows sustained growth, despite political unrest and gyrating markets. 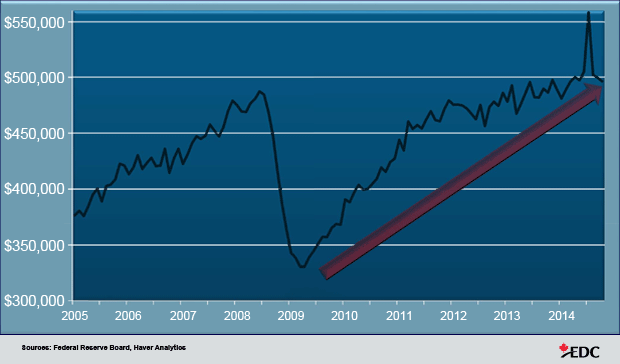 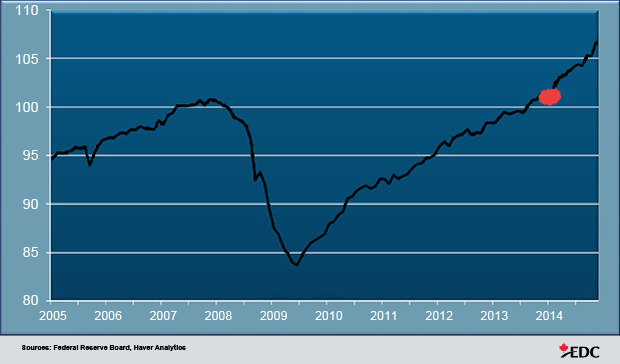 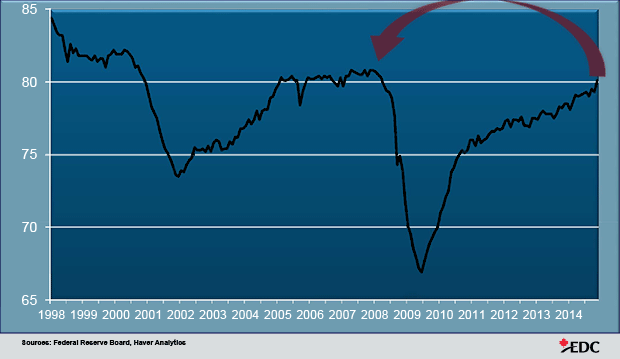 “The growth we have seen for the past three years is driven by consumer spending,” Bergman states. “If you look at the growth trajectory, retail sales are up and factories are humming. In fact, factory orders (see Figure 1) are beyond where we were before the recession. And you know companies don’t make those decisions if they feel we are still in a recession.”

Production capacity–the utilization of factories and services to fill orders–is another key index, Bergman says. “As capacity reaches higher levels, companies start thinking about expanding their ability to produce. And with companies sitting on so much cash–some $6 trillion globally–the investments in new plants and equipment are taking place.”

As shown in Figure 2, Bergman points out, U.S. spare capacity has virtually disappeared. At the same time, U.S. manufacturing orders at factories are up (Figure 1) and industrial production is on a tear (Figure 3).

“This investment is not taking place only in some industries, it’s happening around the world and it’s not something you read in the financial papers,” Bergman states. “Capacity is rising.”

Investments in production capacity are being made to meet pent-up demand. Bergman cites “a monstrous growth cycle before the recession that ended with an enormous buildup of excess inventory.” When the economy faltered, he says, “All that inventory had to be worked down before production could ramp up again.”

The difference between a typical economic recession and the recession of 2008 is the growth cycle that preceded the latest downturn. “We had 16 years of uninterrupted growth leading to this recession,” he observes. “This doubling of the growth cycle effectively doubled the excess inventory that had to be worked down.”

Once excess inventory is drawn down, “The natural tendency of the economy is to rise,” Bergman attests. “The best illustration of that is the housing market.”

The decline in the number of new houses built during the recession was so rapid and so deep that Bergman says it was three years before new housing construction caught up with population growth. “Even with 30 percent growth in new houses built, it still hasn’t caught up,” he says.

A concurrent rise in consumer confidence also provides stability to the economic outlook, Bergman says. Bolstering that confidence is a general improvement in the fiscal condition of governments around the world. “As the economy improves, the drag from government deficits shrinks, further improving performance,” he says.

With uncertainty comes the tendency for companies to hoard their money. Bergman recalls that when the recession hit, companies “did not know where their next sale would be, so they tore up contracts and let people go. With customers not buying, companies didn’t need to invest. As the crisis was unfolding, overall liquidity increased by $9 trillion.”

What happens to all that money? Bergman says that in order to secure returns for their shareholders, companies began chasing yield. And with everyone buying into the same bond market, prices collapsed. So, they began pursuing riskier and riskier bonds and stocks, such as those in emerging markets. “That was when we saw equity prices soar,” he reveals.

At some point, Bergman notes, central banks have to address excess liquidity. “We have to slowly and carefully put less money into the system. Otherwise, there could be chaos,” he reasons. “As quantitative easing unwinds, some nations will be more exposed to greater risk.”

Bergman says he sees 2015 as the first full year of a sustained growth cycle. “The next two years will be extremely exciting and rewarding for companies that have the strategic innovation to seek opportunities present in this strong economy,” he predicts.

The forecast is not without risks, Bergman allows. “Monetary policies of the world’s leading economies are unprecedented. There also are downside risks in unwinding quantitative easing, heightened geopolitical conflicts, and a return of risk differentiation,” he offers. “Investors are forced to differentiate between good and not so good investments versus simply moving money to wherever they can see a return.

“The old saying about a rising tide lifting all boats now adds that when the tide goes out, you see who is swimming without shorts on,” Bergman expresses.

Bergman told his Denver audience he “promised not to talk much about energy prices, but I will say that we haven’t seen this level of volatility since the 1970s.”

“In our view, the slide in oil prices is temporary,” he assured. “With indexes on the positive side, strong demand in the housing market, increasing consumer confidence, and unwinding of quantitative easing, demand for energy will increase.”