Ranking nations by the most likely estimate for existing fields, discoveries and as-of-yet undiscovered fields (proved, probable. possible and undiscovered), the United States is at the top of the list with 264 billion barrels of recoverable oil reserves, followed by Russia with 256 billion, Saudi Arabia with 212 billion, Canada with 167 billion, Iran with 143 billion, and Brazil with 120 billion (Table 1). 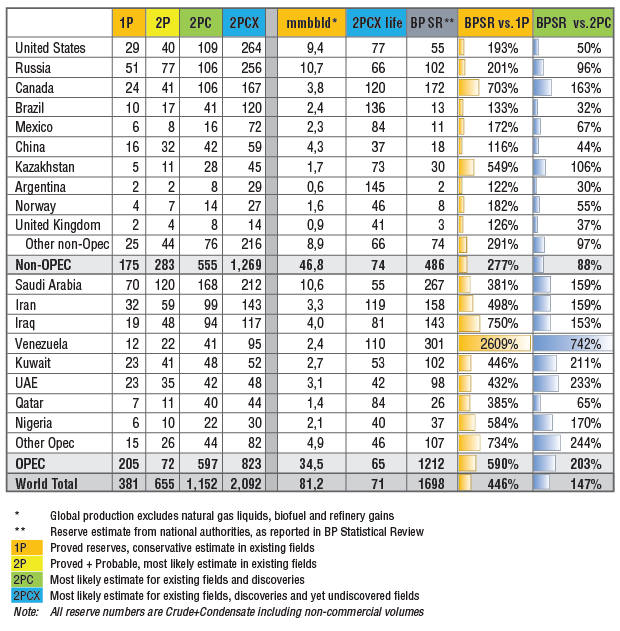 The reserves data distinguish between reserves in existing fields and new projects, and potential reserves in recent discoveries and still undiscovered fields. The estimates include crude oil plus condensate.

An established standard approach for estimating reserves is applied to all fields in all countries, so reserves can be compared apple-to-apple across the world, both for OPEC and non-OPEC countries.

Other public sources of global oil reserves are based on official reporting from national authorities, with reserves reported based on a diverse and opaque set of standards. For example, some OPEC countries, such as Venezuela, report official reserves apparently including yet-undiscovered oil, while China and Brazil officially report conservative estimates and only for existing fields.

Per Magnus Nysveen is a senior partner and head of analysis at Rystad Energy. With broad experience in upstream valuation, cost modeling and oil macro analyses, he is in charge of Rystad’s North American shale analysis. Prior to joining Rystad Energy in 2004, Nysveen had 15 years of international experience within technology, risk management and venture business. He holds an M.S. from NTNU Trondheim and IFP Paris, and an M.B.A. from INSEAD Fontainebleau.