WASHINGTON–Unconventional oil and natural gas activity is revolutionizing America’s energy future and generating enormous economic benefits. As oil and gas production from resource plays continues to expand, substantial growth is expected in capital expenditures and industry employment to support this activity, generating millions of jobs and billions in government receipts. 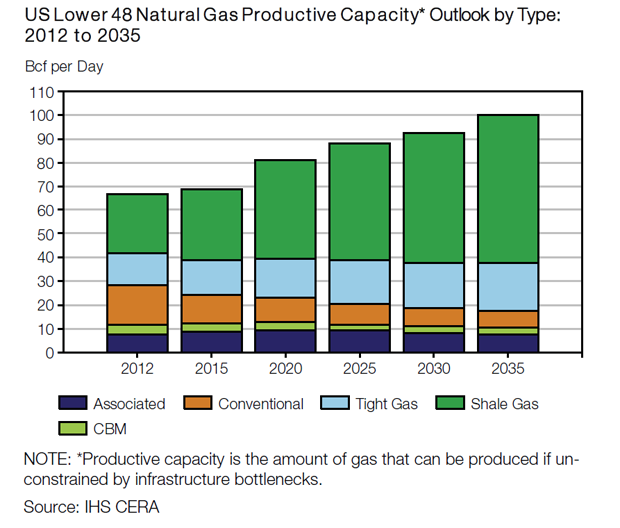 Similarly remarkable is the transformation in the natural gas market emanating from the rapid expansion of unconventional production. Over the past five years, domestic gas production has risen by 13 billion cubic feet a day. In 2000, shale gas accounted for only 2 percent of total U.S. natural gas production. Today, it represents 37 percent. 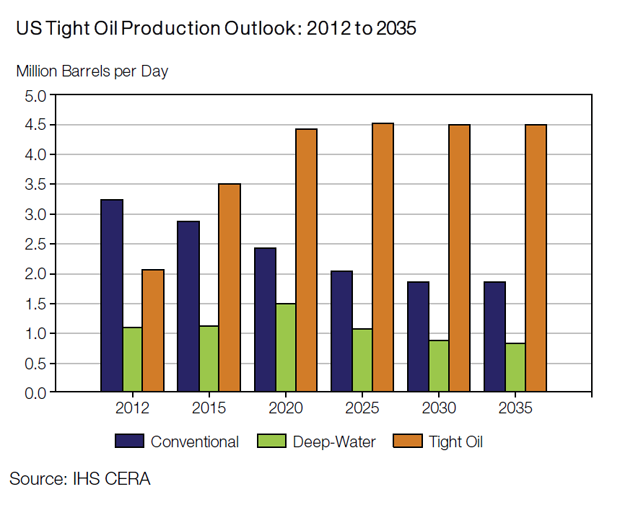 By the end of the decade, natural gas production likely will reach nearly 80 Bcf/d, with almost 75 percent of that coming from unconventional plays (Figure 1). This burgeoning natural gas supply, and its impact on prices, is a significant factor supporting a manufacturing renaissance. It also is enhancing U.S. energy security and prompting a national discourse about wider markets for natural gas, including using it as a vehicle fuel. 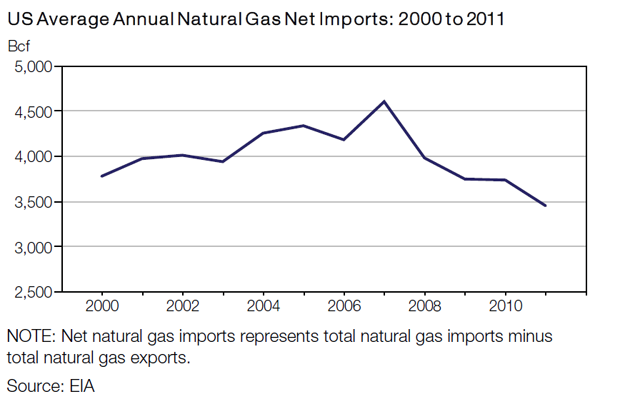 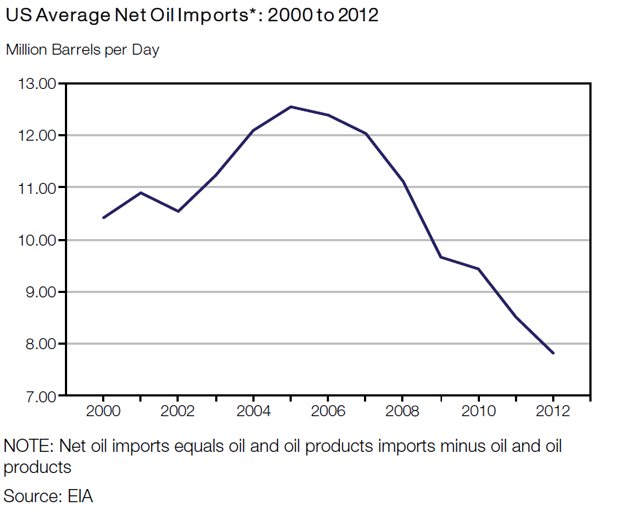 Prior to the unconventional revolution, domestic crude oil production experienced a long period of decline, falling from 9.6 MMbbl/d in 1970 to 5.0 MMbbl/d in 2008. However, crude oil and condensate production from tight oil plays has jumped from 100,000 bbl/d in 2003 to 2.0 MMbbl/d today, resulting in a 1.2 MMbbl/d gain in total U.S. oil production between 2008 and 2012. The strong growth in tight oil output is anticipated to continue, reaching nearly 4.5 MMbbl/d by the end of the decade to represent nearly two-thirds of domestic crude oil and condensate production (Figure 2).

Natural gas imports have been declining steadily over the past five years (Figure 3A), and the question going forward is not how much liquefied natural gas the United States will have to import, but rather how much it should export. On the oil side, net petroleum imports have fallen from 60 percent of total consumption in 2005 to 42 percent today (Figure 3B). With increasing unconventional production, combined with improved automobile fuel efficiency and demographic factors, U.S. oil import volumes will continue to shrink.

The economic impact of reducing oil imports is clear already. Net imports are projected to reach $319 billion this year, equivalent to 45 percent of the nation’s estimated 2012 trade deficit ($695 billion). Oil imports would have cost the United States $70 billion more (raising the trade deficit by 10 percent), had increased production capacity from tight oil plays not been realized. If the net U.S. oil import requirement is 4.5 MMbbl/d less in 2020, it would represent an annual reduction of nearly $185 billion.

Natural gas liquids production is also on the rise. After decades of relatively flat production, unconventional activity has unleashed rapid growth in domestic NGL production over the past five years (up 29 percent since 2008). Going forward, NGL production from unconventional plays is anticipated to more than double, from 1.8 MMbbl/d this year to 3.8 MMbbl/d by 2020. This has significant implications for supporting expanded U.S. petrochemical, manufacturing and industrial activity.

Unconventional energy development has become an engine of job creation and economic growth, making significant contributions to the U.S. economy through direct employment, diverse connections with supplier industries, the amount of spending this direct and indirect activity supports throughout the economy, and the revenues that flow to federal, state and local governments (Table 1). 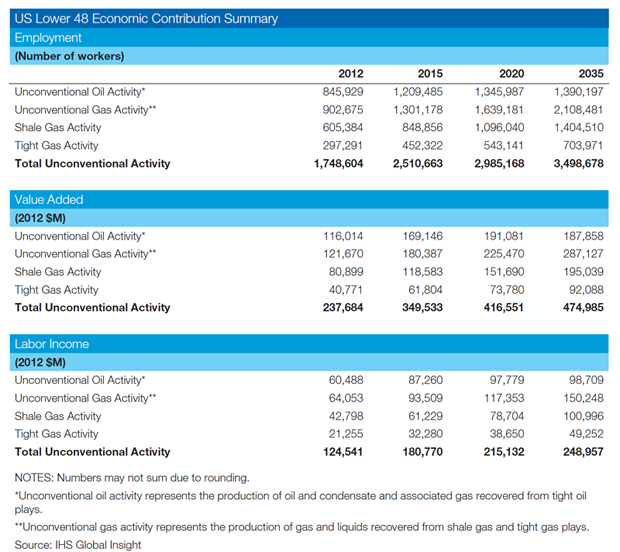 Employment attributed to unconventional oil and gas activity is supporting more than 1.7 million jobs today, and will grow to 2.5 million jobs in 2015, 3.0 million in 2020, and 3.5 million in 2035. On average, direct industry employment will represent about 20 percent of all jobs resulting from unconventional activity, with the balance contributed by indirect and induced employment.

Against a backdrop of an historically slow economic recovery and persistently high unemployment rates following the recession that began in 2008, the surge in spending associated with unconventional oil and gas is proving an important engine for jobs creation and economic growth. America has the opportunity to benefit from a new energy future fueled by a growing domestic supply of oil and gas unlocked by technological innovations such as horizontal drilling, hydraulic fracturing and seismic imaging.

How important is unconventional oil and gas to the United States? In only five years, unconventional activity has thrust the nation into an unexpected position of being the global leader in crude oil production growth (adding 1.2 MMbbl/d of capacity since 2008) and the world’s largest natural gas producer (65 Bcf/d in 2012). Moreover, unconventional activity has allowed the United States to add more than 500,000 barrels of oil equivalent a day in NGL production over the past five years.

The numbers are striking. Unconventional energy supports 360,000 direct jobs today, 537,000 indirect jobs in supplying industries, and 850,000 induced jobs in the lower-48. Unconventional oil activity, which today accounts for 845,000 U.S. jobs, is forecast to expand by 40 percent to 1.2 million jobs by 2015, while unconventional gas activity (supporting 900,000 jobs this year) is on pace to grow by 44 percent to nearly 1.3 million jobs in 2015. Both sectors show uninterrupted job growth through 2035 (to a combined 3.5 million jobs), helping offset the significant unemployment and underemployment rates in the overall economy.

Unlike other industries in which infrastructure activity represents only the front end of an overall project and its effect is reduced during the steady-state operating phase, infrastructure development continues on an almost continuous basis in unconventional oil and gas. Consequently, the substantial employment levels and growth are related to the nature of capital investment requirements to develop these resources.

Another key reason for the profound economic contributions associated with unconventional oil and natural gas is the “employment multiplier,” which measures the contribution jobs make to the economy through the indirect and induced jobs created to support an industry. The larger the multiplier, the greater the ripple effect of every dollar spent within an industry in terms of creating residual benefits across the broader economy.

The oil and gas industry, on average, demonstrates a large employment multiplier. This is partly because unconventional oil and gas activity is so capital intensive and has such a wide-ranging supplier base. It also is related to the strength of domestic suppliers. The United States is a world leader in all aspects of unconventional oil and gas activity. Unlike other U.S. industries, there is an extensive domestic supply chain, which means a larger portion of the capital spent here stays here to support American jobs.

Jobs That Stand Out

The economic contribution also includes induced employment from the expenditure of income from direct and indirect sources. The quality of industry jobs is a reflection of the higher income expenditures originating from direct and indirect jobs linked to unconventional activity. Given the technologically innovative nature of unconventional oil and gas development, these jobs stand out from other employment opportunities.

The U.S. Bureau of Labor Statistics reports the average hourly wage for oil and gas workers is higher than for workers in most other industries, as well as the average wage in the general economy. This creates a larger multiplier and induced impact because more income is spent on general goods and services by unconventional oil and gas workers than workers in other industries.

Unconventional exploration and production activity has pushed up earnings for blue-collar oil and gas workers, regardless of their educational attainment. For many of these occupations, the educational requirement is a high school diploma or equivalent, plus some amount of vocational and/or on-the-job training, opening positions to a wider range of candidates.

While traditional white-collar occupations and related professions are paid at the highest levels, there are robust wages (ranging from $17 to $33 an hour, according to 2010 Bureau of Labor Statistics data) for skilled and semiskilled blue-collar workers, including plumbers, pipe- and steamfitters, cement masons and concrete finishers, industrial machinery mechanics, pump operators, welders, inspectors and testers (Table 2). 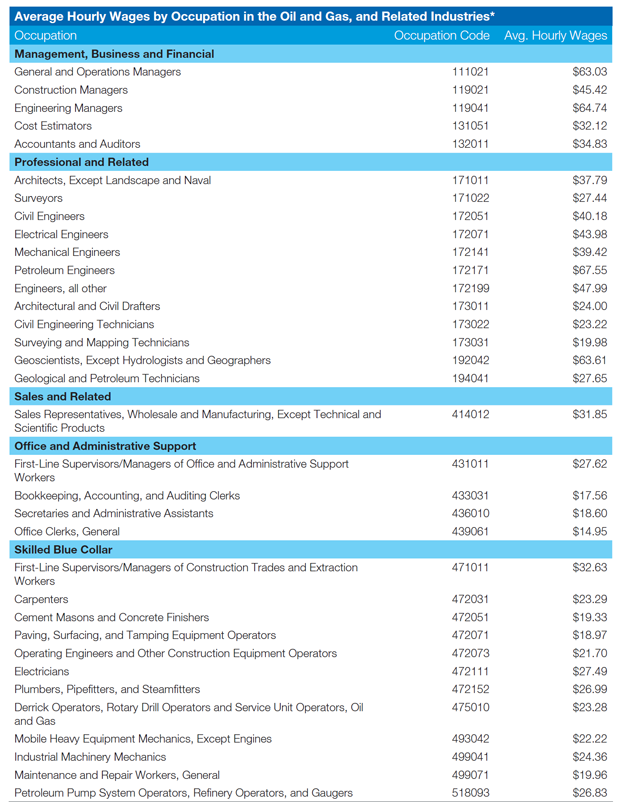 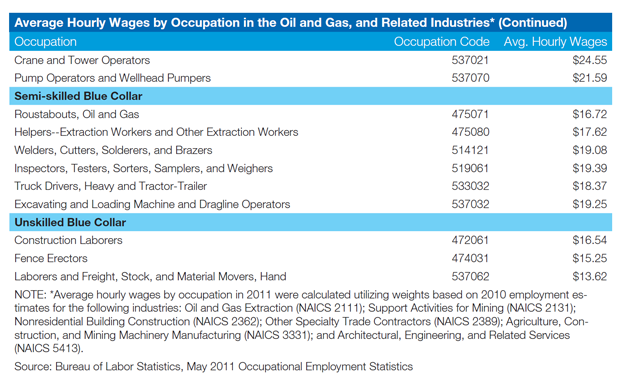 The exploration, drilling and production industry is fueling the unconventional revolution through an estimated $87 billion in capital expenditures in 2012. Since the technology, tools and know-how for developing these plays are home grown, an overwhelming majority of every dollar spent throughout the supply chain remains in the United States to support domestic jobs. Extensive supply chains across many states (including states that do not produce oil and gas) reach into multiple facets of the American economy.

Annual capital expenditures in support of domestic unconventional energy activity are forecast to grow to $172.5 billion by the end of the decade. Cumulative capital expenditures on unconventional oil and gas development, including drilling, completion, and constructing midstream facilities, are expected to exceed $5.1 trillion by 2035 (averaging $200 billion annually). This spending will feed into the broader supply chain through capital-intensive purchases of heavy equipment, iron and steel, rig parts, technical skills and services, information technology, etc.

At a time when government budgets are of great concern, the unconventional revolution has had a considerable fiscal impact. Industrial activity and employment associated with unconventional oil, gas and NGL development will generate nearly $62 billion in federal, state and local tax receipts this year, divided evenly between federal tax revenues/royalties and state and local taxes. How big is $31 billion a year? On the federal level, that amount is sufficient to fund almost 80 percent of the combined annual budgets of the U.S. Department of Interior, the U.S. Department of Commerce, and the National Aeronautics and Space Administration.

By 2020, total government revenues from unconventional oil and gas will grow to more than $111 billion. On a cumulative basis, unconventional activity will generate $2.5 trillion in tax revenues between 2012 and 2035, split evenly between state and local tax receipts and federal tax receipts.

Editor’s Note: The preceding article was adapted from America’s New Energy Future: The Unconventional Oil and Gas Revolution and the Economy, an independent assessment of the contribution of unconventional resource plays to the U.S. economy. The report was prepared by IHS and supported by the American Petroleum Institute, the Institute for 21st Century Energy, the American Chemistry Council, and the Natural Gas Supply Association.

JOHN W. LARSON is vice president of public sector consulting for IHS, and served as a project director on “America’s New Energy Future: The Unconventional Oil and Gas Revolution and the Economy.” As managing director of IHS Global Insight’s decision analytics and economic impact analysis practice, Larson has 10 years of experience in integrating analytical tools for more efficient and effective business and policy decisions. Prior to joining IHS, he spent eight years working for management consulting and accounting companies, bringing data-driven solutions to both public- and private-sector clients. Larson holds bachelors’ in economics and history as well as a master’s in public policy from the College of William and Mary.