HOUSTON–Unconventional oil and natural gas development is changing the energy and chemical industries dramatically, both in North America and across the globe, according to an IHS report released in January.

The IHS report also says the United States is reaping the benefits from developing its unconventional oil and gas resources.

IHS Chief Economist Nariman Behravesh, who authored the report’s section on energy and the economy, says the United States, in particular, is experiencing positive impacts from the unconventional revolution, such as:

Behravesh comments that unfriendly policies on both the state and the federal levels could slow unconventional resource development, but says they won’t stop it. “Regulations could really get in the way, because one of the remarkable things about this revolution is that it had nothing to do with government policy,” he says.

Why has North America been able to develop its unconventional resources before other continents, and position itself as the global leader in shale gas and tight oil? According to Behravesh, the answer comes down to a specific combination of factors, including:

The other development that could come from the unconventional revolution, Behravesh adds, is that other countries eventually will begin developing their shale deposits, following the North American model and utilizing the expertise developed in lower-48 and Canadian resource plays. For example, China, he says, has the largest known shale deposits, but does not have the infrastructure to develop its resources at present.

“But, that could change,” Behravesh remarks. “Other countries, such as the United Kingdom and Poland, are beginning to look at this seriously. We will start to see many other countries take this opportunity, and for the world as a whole–and thus for the United States–it would be an upside because it would keep energy costs down globally, and that would stimulate economic growth.”

The IHS economist clarifies that the countries that have shown an interest in pursuing their shale resources are still at least 10 years away from commercial development, “so North America essentially has a 10-year lead on them. We still can enjoy the fruits of this revolution in the United States before it goes elsewhere.”

According to IHS research, the direct, indirect and induced effects of the unconventional revolution have added 1.7 million jobs, with 3.0 million jobs total expected by 2020. It also has added $62 billion to federal and state government coffers in 2012–of which $111 million is expected by 2020–through various taxes, royalties, etc.

Additionally, global chemical companies are building or expanding their facilities in North America for exporting goods, primarily ethylene. Capital expenditures will total about $95 billion over the next decade, according to IHS’s report. Also, U.S. net oil imports were down from 60 percent of total consumption in 2005 to 42 percent in 2012. If that trend continues, Behravesh confirms, the U.S. trade deficit will continue to shrink.

Behravesh says state governments already are taking advantage of the revenue and economic progress the unconventional revolution brings. Consequently, states have started implementing industry-favorable policies and legislation to encourage more development. He points to North Dakota, Pennsylvania and Texas as examples of states with large shale deposits and favorable policies that have seen subsequent growth through oil and gas activity.

“These states are thriving, and other states are beginning to take notice,” Behravesh comments. “There are going to be some multiplier effects on regional and national levels, but it will be difficult to determine those effects exactly. But, typically, IHS expects the biggest impacts in those states and regions with shale activity, with some smaller impacts elsewhere.”

While the environmental debate continues to influence legislative and regulatory discussions, Behravesh says many communities and lawmakers are beginning to realize that the positive impacts of oil and gas development outweigh any negatives.

“Because development creates jobs, lowers energy costs, and reduces carbon emissions, there has been a favorable response to it from most quarters,” he clarifies. “These positives are outweighing, or at least balancing, many of the environmental concerns.”

Among its other ramifications, the unconventional revolution has substantially changed the pattern of global trade and trade flows for manufacturing, the IHS report claims.

“The cost competitiveness of North American energy-intensive industries will put downward pressure on pricing and costs in other regions of the world,” it reads. “Moreover, lower natural gas prices will challenge the economics of new nuclear and renewables,” requiring companies to rethink their long-term strategies regarding sourcing, production and investment.

Behravesh comments that North America has the potential to become energy self-sufficient within the next decade, but to do so, the U.S. government has to implement and maintain supportive energy policies.

According to the study, increased Saudi Arabian oil output and growth in non-OPEC supply, in addition to the North American unconventional revolution, suggests the oil market is well supplied. Even though Brent crude set a new high in 2012 at $118 a barrel, the continuous supply may cause prices to moderate within the next few years. Prices have remained high, IHS states, because of “supply outages–actual and feared–in the Middle East and elsewhere.”

IHS predicts the world oil market could this year see “supply growth from outside the Organization of Petroleum Exporting Countries exceed the growth in world oil demand,” which has happened only four times since 1986. However, as some countries’ oil production decreases because of civil conflicts and political tension, other countries–such as the United States–are ramping up their development and output.

“High levels of supply from Saudi Arabia, and growth from the United States and Canada, have helped the market adjust to the losses from Iran, as well as those from Syria, Yemen and South Sudan,” the report continues.

First, non-OPEC growth could be matched with cutbacks from key OPEC producers. The possibility of reducing the geopolitical “fear premium” from what it otherwise would be would diminish the likelihood of a big increase in oil inventories, and would increase the amount of spare production capacity, the report says. In fact, IHS notes that Saudi Arabia was reducing its production in late 2012, suggesting that this course of action is occurring already.

Second, a significant increase in world oil inventories could shift market psychology “from concern about supply adequacy to worries about too much oil in the market,” the report states.

However, IHS cautions, “Non-OPEC supply projections have a history of disappointment because of technical and weather-related difficulties, and security challenges.”

Still, the technological and engineering breakthroughs of the past few years, as well as other circumstances, may enable for strong non-OPEC production growth this year, which “could be a moderating influence on oil prices,” IHS allows.

OPEC’s production and pricing also will influence industry growth in North America, according to IHS. Lower oil prices, which he says could drop as low as $80 a barrel by 2015, would be a result of the globally competitive oil market, and would be good for energy consumers. While production and pricing may suffer in North America, development probably would continue its trend toward self-sufficiency. According to IHS, this would allow OPEC to focus more on selling its oil to emerging markets in Europe, China and India. 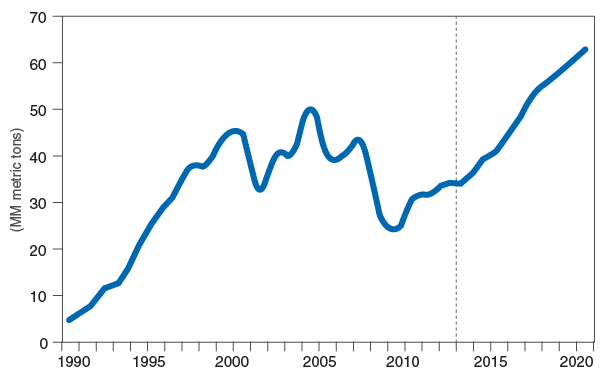 Because of diverse market dynamics associated with a steep increase in U.S. and Canadian natural gas supplies, IHS says gas-based raw materials have transformed North America into a low-cost region for producing chemicals.

“This advantage is attracting significant capital investment as producers across the region link new sources of low-cost raw materials with retrofitted or new facilities for leveraging these low costs into a global supply position,” the report reads.

As much as 10 million metric tons of new ethylene capacity is scheduled to be built within the next 10 years, and producers of other gas-based chemical products are advancing similar capacity plans, IHS adds.

Overall, North American chemical consumption is projected to remain moderate, which will allow for more exports. Consequently, “Basic chemicals and plastics production from 2013 to 2020 is forecast to increase at an average rate of 5 percent a year,” IHS estimates.

Beyond 2020, the region could “return to more downstream manufacturing of durable and nondurable goods, based on these low-cost chemicals and plastics.”

Dr. Nariman Behravesh is Chief Economist of IHS and author of Spin-Free Economics: A No-Nonsense, Nonpartisan Guide to Today's Global Economic Debates (McGraw-Hill). Directing IHS' entire economic forecasting process, he is responsible for developing the economic outlook and risk analysis for the United States, Europe, Japan, China and other emerging markets. He oversees the work of over 400 professionals, located in North America, Europe, Asia, Latin America, the Middle East and Africa who cover economic, financial, and political developments in over 200 countries.

Behravesh and his team have ranked among the top economic forecasters over the years in surveys by Reuters, USA Today, MarketWatch and the Wall Street Journal.

Behravesh holds Ph.D. and M.A. degrees in economics from the University of Pennsylvania, and a B.Sc. from the Massachusetts Institute of Technology. He is fluent in several languages and travels regularly to Europe, Asia, Africa, and Latin America.