AUSTIN, TX.–U.S. upstream oil and gas merger and acquisition deal value clocked in at $84 billion in 2018, ranking as the highest total since 2014, according to a report from Drillinginfo. Large billion dollar-plus deals fueled the surge in the back half of the year with a record-setting $32 billion in the third quarter and $21 billion in the fourth quarter.

BP’s transformational $10.5 billion acquisition of most of BHP’s shale assets is the largest deal of the year (Figure 1), and the fourth largest since 2009. The deal underpins BP’s strategy to roll-out BPX as an independent and a leading U.S. onshore shale player, the report states.

The pace of consolidation picked up late in 2018 with corporate-level deals accounting for more than 70 percent of the $21 billion total fourth-quarter deal value, he observes. That was the highest quarterly corporate deal total since the third quarter of 2014, before collapsing global oil prices spun the industry into a downturn.

“Investors continue to demand that companies deliver a clear line-of-sight to positive free cash flow,” Dittmar remarks. “Scale is one piece of the puzzle on how to get there given efficiencies in developing larger acreage blocks, optimizing supply chain logistics to lower costs and general and administrative savings. Wall Street no longer supports growth for growth's sake, and is ready to punish buyers who do deals without a clear profit strategy.”

Perhaps the most talked about week in the industry’s recent history occurred in late October and early November, when Dittmar says public company consolidation “went into a frenzy.” Within a span of only five days, beginning on Oct. 27, Denbury Resources acquired Penn Virginia for $1.7 billion, followed by Chesapeake Energy’s $3.9 million deal to purchase WildHorse Resource Development on Oct. 30 and Encana’s $7.7 billion buyout of Newfield Exploration on Nov. 1.

Immediately on the heels of those transactions, however, came a precipitous drop in oil prices that broke all support levels beginning in early November and ground the deal markets to a virtual stall, the report recalls (through mid-January, WTI had rebounded $10 over its closing price on Christmas Eve). Other public company consolidations in 2018 included Concho Resources’ $9.5 billion deal for RSP Permian in late March, Diamondback Energy’s $9.2 billion acquisition of Energen in August, and Cimarex Energy’s $1.6 billion deal for Resolute Energy, announced on Nov. 19.

That said, private and institutional capital is still highly active in the upstream business and playing an important role, the report stresses, with private equity-backed companies continuing to explore emerging areas such as the Louisiana Austin Chalk as well as more established resource plays.

“Private equity capital also is ready to move in when it feels public markets are undervaluing assets or companies, as seen by the letter put out by Elliott Management addressing QEP Resources Inc.’s stock performance, and including a firm offer to buy the company,” the report states. That comments was in reference to a letter the New York-based hedge fund sent to QEP Resources’ board in early January that cited the undervalued stock performance and offered to buy the company for a reported $2.55 billion (Elliott Management has a 5 percent stake in QEP, according to Refinitiv data).

Drillinginfo says another clear theme from 2018 was the institutionalization of the minerals market, with deal activity in this sector growing 100 percent over 2017 to reach nearly $3 billion. Buyers cross all capital sectors from public royalty companies such as Kimbell Royalty Partners to institutional players like Ontario Teachers’ Pension Plan and public operators like Continental Resources.

The Permian Basin was again the most active area for M&A deals, accounting for $28.3 billion (33 percent) of the $84.3 billion total (Figure 2). According to the report, other key takeaways from 2018 included:

For 2019, Drillinginfo says it expects the pace of oil and gas deal markets to remain impacted by oil price volatility, which ultimately provides numerous special situation opportunities, particularly for oil equities that have been oversold.

According to Brian Lidsky, the company’s senior director of market intelligence, “The straight-line drop in WTI spot oil prices from the start of October to just before Christmas coincided with the risk-off appetite that was pervasive across the capital markets. US exploration and production equities responded largely in lock-step with the rapid decline. Looking ahead, the reality is that albeit global oil demand may slow some, growth remains unabated and for all intents and purposes has surpassed the 100 million bbl/d level. All eyes are on the impact of the start of OPEC+ round two cuts, Iran sanctions, plus the trend of global oil demand.” 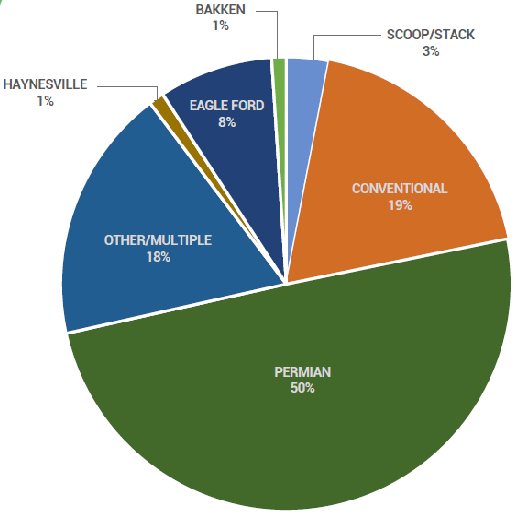 Drillinginfo quantified $39 billion of upstream deals in play in the United States at the start of 2019 based on known active marketing processes, 50 percent of which were located in the Permian (Figure 3). “There are certainly high-quality assets in the marketplace and buyers ready to acquire. The only barrier is bridging the bid/ask price. Historically, if the gap has widened, deals often come with contingent payments predicated on a price or asset performance benchmark,” the report reads.

For more information on 2018 M&A activity and the 2019 outlook, visit drillinginfo’s website.