A key advance in dynamic simulation technology is developing virtual sensors that generate a process variable value–temperature, flow volume, pressure, composition, fluid properties, etc.–in real time by means of a rigorous dynamic model whereby the instruments are used to read the other available variables. Virtual sensors provide far more process variables than those that can be obtained from instruments, allowing any process to be monitored in much greater detail for better control.

Dynamic simulation of process plants and equipment is a very different discipline from steady-state simulation, in which time does not exist and the process plants are represented in a stable operational state–a state of equilibrium in which there is no accumulation of mass or energy. Dynamic models take time into account, along with the mass and energy imbalances that tend to occur in equipment. They are a type of simulation that set out to reproduce the real condition of a process plant, providing values that correspond to process variables as a function in time. They enable designers to interact with a dynamic model as they would with a real plant.

Dynamic simulation and steady-state simulation have developed along parallel lines, with solutions becoming ever-more modular, precise, interactive, fast, and easy to use. The main benefit of dynamic simulation is the much deeper knowledge it provides of the process as a result of improvements in system control design, plant operations, and staff training. Among the applications of dynamic simulation, some of which are used more extensively than others:

In addition to these applications, there is another area of dynamic simulation that is less often used, but that can offer added value: creating virtual sensors, also known as soft sensors or online inferential models.

A virtual sensor is capable of estimating an important and often difficult to measure process variable such as a product quality. It does this by means of an online calculation using other measured variables. There are two fundamentally different types of virtual sensor:

Virtually the entire process industry uses more or less complex virtual sensors to calculate the mass and/or energy balance in the control systems themselves. A typical example is the mass and energy balance in an exchanger, with a view to calculating an unmeasured exit temperature. This calculation can be as complicated as is necessary to take account of the effects of pressure and temperature on calorific capacity and density, all the more so if the fluid’s analytical composition is known. These calculations often are so complex that they can be deciphered only by the calculation’s author, which means they become meaningless when the author moves to another job.

Using steady-state or dynamic simulation models can help when it comes to developing calculations and correlations that thereafter are executed online, or simulation models that can be used directly online on the basis of real-time process data.

The term online can be interpreted in a number of ways. In this case, it refers to automatically obtaining data from a plant in real time, performing a calculation by means of a correlation or model, and subsequently exporting the value to the plant’s control or information system to inform the operator or serve as a controller’s input signal.

However, we should not expect a dynamic simulation to be capable of providing acceptable virtual sensors for any process unit. Its application range is limited to units that meet the following criteria: 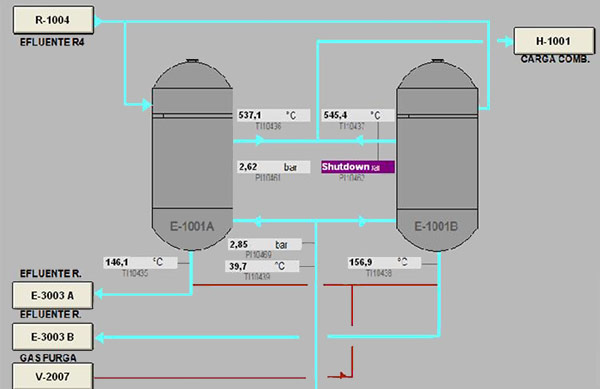 Consider the case of a steady-state virtual sensor that calculates, among other things, the fouling of two parallel shell and tube exchangers (Figure 1). What circulates on the tube side is a reactor exit gas stream; on the shell side, a stream of entry gas circulates in these same reactors. Their purpose is to preheat the combined reactor load from 40 degrees Centigrade to 540 degrees, taking advantage of the reaction exit effluent, which is at 650 degrees. These exchangers tend to become fouled over time. To be able to program and justify the cleaning operations that involve a plant shutdown, it is important to know with some precision the degree of fouling and its extent.

The plant has online composition analyzers for both streams, which in conjunction with data from other instruments (pressure, temperatures, total flow rates), are collected automatically by a rigorous steady-state model that filters the data, closes mass and energy balances, and on that basis calculates the degree of fouling. The system also obtains supplementary data such as convection factors, densities, etc.

Figure 2 shows the construction stages of a dynamic model and its corresponding effort in percentage terms, with respect to the total time required for development.

Once the dynamic model has been constructed, the most important stage is its dynamic validation. This consists of verifying that the model dynamic is the same as that of a real plant, given the same inputs and under the same boundary conditions. Often, not enough attention is paid to the latter part of the process, since the model is assumed to be good because it is based on a rigorous simulation tool, or because the steady state is represented correctly.

Traditionally, rigorous dynamic models have been viewed with a certain amount of scepticism when it comes to reproducing real-plant dynamics. This scepticism is, nevertheless, understandable, as hardly any studies have been published that demonstrate accuracy.

There are three ways to carry out a complete dynamic validation. The first is comparing movements. This relates to effecting a change in the real plant while the other actions remain constant, and then repeating the same change in the model to determine whether it produces the same dynamic and effects. This means of validating a model could not be carried out easily in reality because the disturbances (whether measured or unmeasured) are acting on the process also. It is difficult to obtain clear responses in most cases, although for some very simple models, the responses may be sufficient.

The second way to accomplish dynamic validation is to compare dynamic matrix control (DMC) models. In this case, step-tests are conducted on the simulation model to identify a DMC model that can be compared with a real plant. Logically, this is possible only if a reliable DMC model of the unit exists in the first place.

It is important to stress that this type of comparison does not take into account the offsets of the simulation model in comparison with the real plant, so it only compares process gains and dynamics. These may be sufficient if the aim is to obtain response curves. 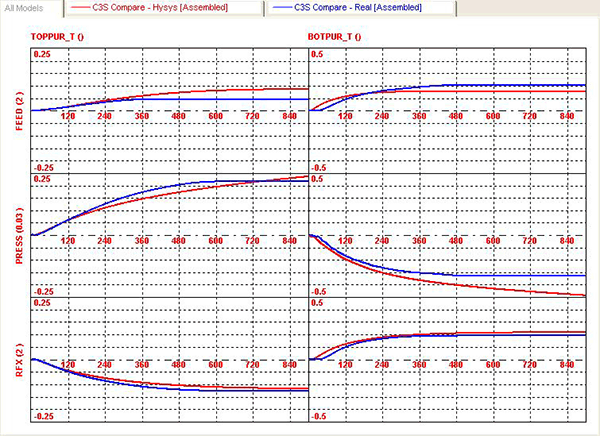 Figure 3 shows an example of comparing DMC models for a propane/propylene splitter containing 230 sieve trays and a heat pump. It compares feed, pressure and reflux response curves with top and bottom quality. Marked in blue are the curves obtained from step-tests on the real plant; the red shows responses obtained from the simulation model’s step-tests.

This type of validation is useful only if the main disturbances in the real plant are measured. Strong disturbances that go unmeasured cannot be introduced into the simulation model; consequently, the responses may be different.

Comparing historical data was used to validate a case study example from a propane/propylene splitter unit. It consisted of two heat-integrated columns, where the condenser of the first was the reboiler for the second. This introduced a heat integration interaction that complicated the dynamic responses. 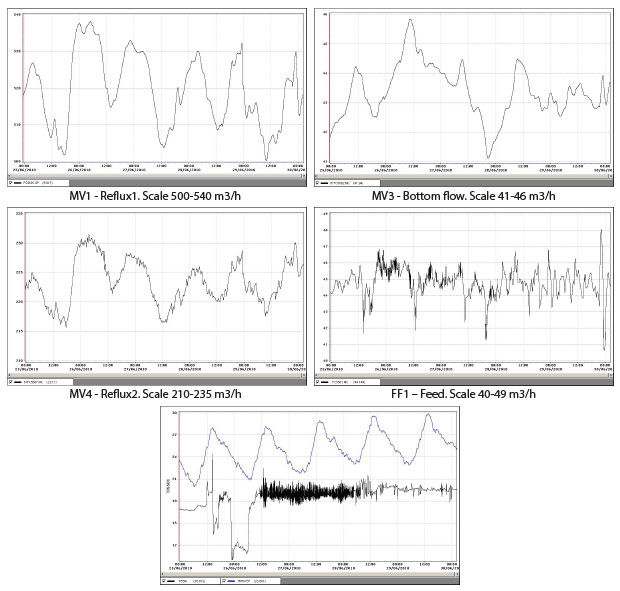 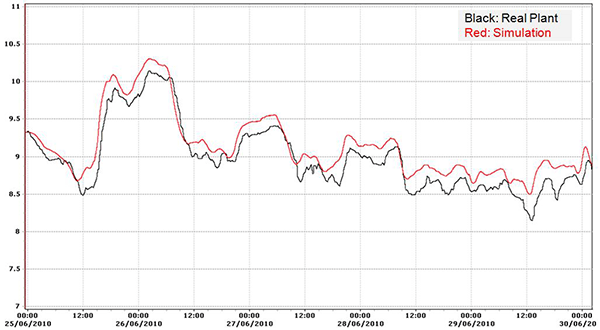 Percent of Propane in Propylene at the Top of Second Column 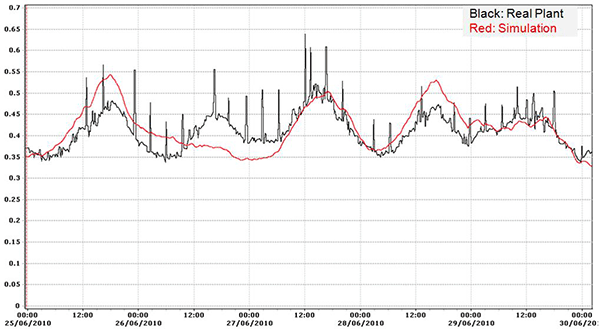 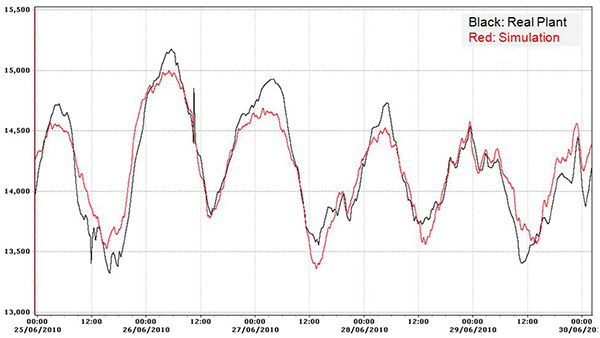 The validation period for the historical data variables with which the dynamic model was supplied was five days at one-minute sampling, and the propane-to-propylene ratio was measured upstream by an online analyzer, meaning the ratio was used as one of the boundary conditions. The charts in Figure 4 show the trend of actual plant variables imposed on the simulation model.

Figures 5A-5C show some of the variables calculated by the dynamic simulation model (shown in red), compared with the corresponding variables of the real plant (shown in black). Specifically, Figure 5A shows the percentage of propylene in propane at the bottom of the first column; Figure 5B shows the percentage of propane in propylene at the top of the second column. It is important to bear in mind that the scale is 0.0 to 0.7 percent, and it is a polymer grade quality, where impurity must not exceed 0.5 percent. Figure 5C shows the differential pressure of the second column. The pressure is floating in both columns, and there is no associated control loop.

Matching the differential pressure values could be the basis for developing a virtual sensor capable of providing a simulated differential pressure value that would not take into account the phenomenon of flooding, since the simulation tool used doesn’t represent the flooding effects. Therefore, it could be used to prevent flooding when the variables–real versus simulated–indicated a large difference.

Rigorous simulation models can offer a way forward for developing virtual sensors. Those based on steady-state models have a wide range of applications, and could be used to develop a correlation or they could be used online.

Dynamic models, for their part, can provide reliable values for dependent time variables, but their range of uses is restricted to certain specific cases. Their main weakness is the lack of precise knowledge concerning the composition of the entering stream(s), for which online analyzers might be required.

José María Ferrer Almazán is responsible for business development for South Europe and North Africa and supporting technology development at InProcess Technology & Consulting Group. He previously served as a senior consultant at AspenTech, where he executed several dynamic simulation projects in areas such as emergency shutdown verification and advanced process control. With 15 years of experience in the dynamic simulation and control of hydrocarbon processes, Ferrer Almazán began his career as process control engineer at Dow Chemical, and later joined Hyprotech as a business development leader.

Ron Beck has been with Aspen Technology for five years and is marketing manager for aspenONE Engineering. He also has been involved with Aspen’s economic evaluation products. Beck spent 10 years in a research and development organization that was commercializing fluidized bed technologies, enhanced oil recovery methods, and environmental technology. He has 20 years of experience in developing, adopting and marketing software solutions for engineering and plant management, and has been involved with developing integrated solutions for several global chemical enterprises. Beck is a graduate of Princeton University.