The model calibration process started by listing the key observations characterizing the dataset and then performing calibration in a step-by-step process.

The simulator includes conductivity damage reactions to capture negative impacts on parent well production. A single set of conductivity damage parameters (reaction rate and potency) were sufficient to replicate the productivity degradation observed during two separate FDIs one year apart on the parent and child wells.

In this manner, the full sequence of parent-child events was replicated in a continuous simulation. The calibrated model can be employed to identify strategies to mitigate negative impacts and design remediation strategies.

Figure 1 shows the timeline of events for each major production sequence that was matched to actual production. Permeability and relative permeability were altered in the model to match fluid production, while continuing to honor the fracture lengths from sealed wellbore pressure monitoring. In addition, DFITs were evaluated to confirm permeability. 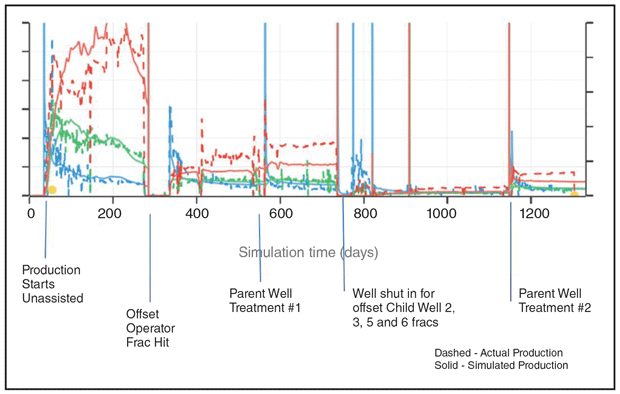 At two different times during the life of the parent well, an FDI experienced while stimulating an offset child well severely affected production. The first event occurred at approximately 300 days when child No. 1 was fractured just outside the drilling spacing unit. The second FDI occurred at approximately 750 days when child wells 2-6 were fractured. At surface, a “gummy bear-like solution” was recovered and the source of the damage was deemed to be conductivity loss in the fracture caused by child well fracture fluid-formation interactions that were clogging the fracture.

The formation of this damage material was modeled by introducing a generic material into the simulation: fracture conductivity damage. The damage material is modeled as being formed from a chemical reaction between the chemical additive in the frac fluid and/or the matrix or formation fluid. Because damage appears more severe during FDIs than during the initial frac jobs, it is assumed that the reaction is enhanced by interaction of frac fluid with the contents of a producing hydraulic fracture, and so the reaction rate is modeled as proportional to the hydrocarbon saturation in the fracture element. Even though frac fluid sweeps hydrocarbon out of the fracture as it invades during a frac hit, some hydrocarbon remains in the fracture elements as a residual saturation.

A reaction rate constant and a potency constant (which models how severely the reaction product damages conductivity) were varied to calibrate the model to the observed production changes. The simulator tracks the spatial distribution of friction reducer concentration as it is injected with frac fluid into the fractures, and tracks concentration changes as that friction reducer is consumed by the damage reaction and converted into conductivity damage material. The amount of conductivity reduction in each fracture element is related to the amount of damage material that has formed. The damage material is assumed to be immobile.

As the damaging fluid is pumped into the child wells, fractures either have coalesced or become hydraulically connected to the parent, allowing for the conductivity to form in parent fractures as well as child fractures closest to the parent. Figure 2 shows fluid progression from one wellbore to another, causing fracture conductivity damage.

The resulting lowered conductivity is manifested as lowered production. The post-FDI production was matched by allowing fluid flow from the child wells to the parent well, and by varying the potency and reaction rate to achieve the necessary fracture conductivity damage to match production results. The same reaction rate and potency is found to predict the productivity decline observed at 300 days and 750 days. The base relative permeability curves and permeability were never altered throughout the simulation.

In the simulation, the treatment solute was pumped at the actual rate and duration, scaled for the number of stages in the model, and the potency and reaction rate constant were tuned to match the observed production uplift. As the treatment solute was consumed by the reaction, the damage to fracture conductivity damage was reduced. The production uplift is a function of the amount of treatment fluid pumped and the amount of contact with the damaged fracture area.

This allows both a temporary increase of water cut during the initial production, and increasing water cut after successive FDIs. Since water production is generally high at the beginning of production, the effect is normally temporary because the banked water is depleted quickly. After successive FDIs, the water production rate becomes progressively lower, so it takes more time to flowback the leak-off fluid and return the elevated relative permeability to original.

Water banking was used to match the temporary elevated production of the parent before frac hits. Since production post-FDI was low because of damage mechanisms, the water cuts tended to stay elevated.

Figure 4 shows that the depleted region around the parent well does not extend past child No. 2. This result is based on the production volume history match, constrained by observations regarding total fracture length and propped length from the sealed wellbore pressure monitoring and interference tests. Thus, while it is possible that child No. 2 could experience reduced production from interference, it is harder to rationalize why child No. 3 also would experience production loss, since it is farther away from the parent well. 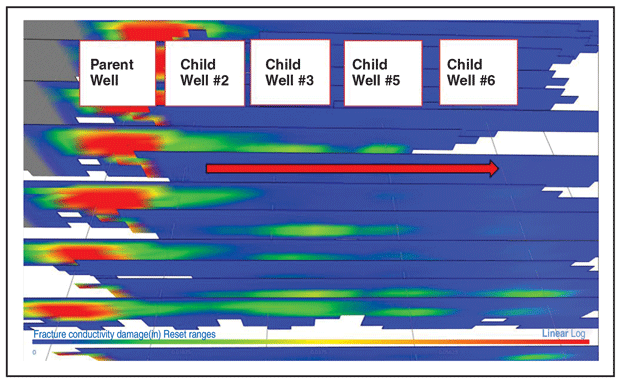 It was theorized that child wells were not only causing parent well damage, but also themselves were experiencing some conductivity damage related to their proximity to the parent. To identify how much damage was taking place, and to understand the effects of well spacing, a simulation without damage was run to understand the theoretical upper limits of the child well production.

By using the exact same damage mechanism used to degrade the production on the parent well, which included a potency to control the magnitude of the reaction, a reaction rate to control the timing of the reaction and making the reaction proportional to the amount of hydrocarbons that are in the fracture, the damage was limited to the wells that had the greatest amount hydrocarbon interchange into the fracture: child nos. 2 and 3. To match the observations, the rate constant and potency of the damage reaction had to be calibrated.

Editor’s Note: The preceding is the second of a two-part presentation on a comprehensive modeling study of complex parent-child well interactions in a five-well pad in the STACK play. Part I appeared in AOGR’s September issue.

DAVE RATCLIFF joined ResFrac in 2019 as the company’s first completions and reservoir engineer and its fifth employee. He has nearly 28 years of oil and gas experience in a variety of disciplines. Before joining ResFrac, Ratcliff spent 10 years working as a petrophysicist and petrophysics department manager for both Forest Oil and QEP Resources. Additionally, he spent 13 years with Schlumberger Wireline in various field, management and design roles. Ratcliff holds a B.S. in mechanical engineering from the University of Texas at Austin.

GARRETT FOWLER is chief operating officer of ResFrac Corp. in Palo Alto, Ca. Prior to joining ResFrac as vice president of operations, Fowler was principal reservoir engineer at Tachyus Corp., where he worked with national oil companies, supermajors, and independents on deploying data science solutions. Before that, he was a reservoir engineer for Occidental Petroleum specializing in waterflood surveillance, piloting, and optimization. Fowler holds a B.S. in energy resources engineering and an M.S. in petroleum engineering from Stanford University.

BRENDAN ELLIOTT is a completions engineer in the drilling and completion technology group at Devon Energy. Primarily focused on complex development planning, modeling and fracture diagnostics, Elliott supports the Delaware Basin and Devon’s other major operated areas. Elliott has a B.S. from Texas A&M University, an M.S. in petroleum engineering from the University of Texas at Austin, and is currently a Ph.D. candidate in petroleum engineering at UT Austin.

AUSTIN QUALLS is a reservoir engineer in Devon Energy’s Delaware Basin business unit. At the time of the five-well STACK pad modeling study, he was working in the Anadarko Basin with a focus on future development planning in the STACK play. Qualls has a B.S. in petroleum engineering from the University of Oklahoma.